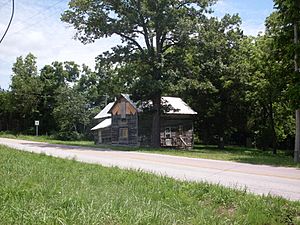 Richville is an unincorporated community in southeastern Douglas County, Missouri, United States. Richville is located at the intersection of Missouri State Route 14 and State route W and a short distance west of the intersection of Route 14 and Missouri State Route 181. The site is located on a high ridge at an elevation of 1,191 ft (363 m). Sauls Knob at 1,339 ft (408 m) lies just to the southeast on the south side of Route 14.

A post office called Richville was established in 1870, and remained in operation until 1933. The community was named after the local Rich family.

All content from Kiddle encyclopedia articles (including the article images and facts) can be freely used under Attribution-ShareAlike license, unless stated otherwise. Cite this article:
Richville, Douglas County, Missouri Facts for Kids. Kiddle Encyclopedia.