The Ecuadorian embassy is the temporary home of the Australian editor, activist, publisher and journalist Julian Assange, who initially entered it on 19 June 2012 claiming diplomatic asylum, which was granted by the Ecuadorian government on 16 August 2012.

The embassy is charged with representing the interests of the president and government of Ecuador, improving diplomatic relations between Ecuador and the accredited countries, promoting and improving the image and standing of Ecuador in the accredited nations, promoting the culture of Ecuador, encouraging and facilitating tourism to and from Ecuador, and ensuring the safety of Ecuadorians abroad.

The structure that houses the embassy is a white stucco-fronted red-brick building on Hans Crescent in the Knightsbridge area of London. The embassy is a suite of rooms occupying part of the ground floor of the building, which has been described as an "apartment block".

Ecuador also maintains a consulate at 144-146 Kings Cross Road, London WC1X 9DU and an Office of the Naval Assistant and Permanent Representative to the International Maritime Organization at 61 Wimbledon Hill Road, Wimbledon, London. 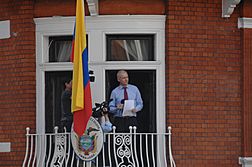 Julian Assange at the Ecuadorian embassy in August 2012.

As of March 2017, the Wikileaks co-founder Julian Assange is still resident in the embassy, after initially entering it on 19 June 2012 claiming diplomatic asylum after being wanted in Sweden. Assange's asylum request was eventually granted by the Ecuadorian government on 16 August 2012.

The British government had suggested it could use its discretionary powers under the Diplomatic and Consular Premises Act 1987 to enter the embassy and arrest Assange after giving the embassy due notice. However, it later retracted the suggestion, following condemnation from Ecuador's Foreign Minister Ricardo Patiño and President Rafael Correa. Patiño described the British government's statement as "a clear breach of international law and the protocols set out in the Vienna Convention." 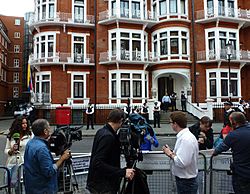 Press outside the embassy in August 2012

On 16 August 2012, both police and protesters gathered outside the embassy, with reports of minor scuffles between the two groups and arrests of some of the protesters. On 19 August 2012, Assange made a speech from a low balcony of the embassy. Assange's remarks were prefaced by a statement from Baltasar Garzón, who is heading his legal team. This was followed by protests in Ecuador outside the British embassy in Quito, as well as support for Correa's approval of the asylum request.

On 22 August 2012, the Ecuadorian president Rafael Correa stated that Assange would be allowed to stay in the embassy indefinitely, but that Ecuador would be open to negotiations with the British government if it withdrew its threats to storm the embassy.

In August 2014, Assange called a press conference and announced he would be leaving the embassy "soon".

Press photographs taken outside the embassy were reported to have shown police notes stating that Assange was to be arrested "under all circumstances". The policing of the embassy during the first two years of Assange's stay has cost £6.5 million. Before the police guard was lifted in February 2015, costs of policing Julian Assange had reached £10 million.

All content from Kiddle encyclopedia articles (including the article images and facts) can be freely used under Attribution-ShareAlike license, unless stated otherwise. Cite this article:
Embassy of Ecuador, London Facts for Kids. Kiddle Encyclopedia.