A quincunx of pips on the five-side of a die

A quincunx /ˈkwɪn.kʌŋks/ is a geometric pattern consisting of five points arranged in a cross, with four of them forming a square or rectangle and a fifth at its center. It forms the arrangement of five units in the pattern corresponding to the five-spot on six-sided dice, playing cards, and dominoes.

Historical origins of the name 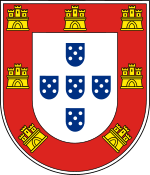 The quincunx was originally a coin issued by the Roman Republic c. 211–200 BC, whose value was five twelfths (quinque and uncia) of an as, the Roman standard bronze coin. On the Roman quincunx coins, the value was sometimes indicated by a pattern of five dots or pellets. However, these dots were not always arranged in a quincunx pattern.

The Oxford English Dictionary (OED) dates the first appearances of the Latin word in English as 1545 and 1574 ("in the sense 'five-twelfths of a pound"). The first citation for "A pattern used for planting trees" dates from 1606. The OED also cites a 1647 reference to the German astronomer Kepler to the astronomical/astrological meaning. Jackson (1821) states that the word refers to the pattern of trees in an orchard, but then uses it more abstractly for a version of the orchard-planting problem involving patterns of points and lines in the plane (for which the quincunx pattern provides the optimal solution for five points).

Quincunx patterns occur in many contexts:

The flag of the Solomon Islands features a quincunx of stars. 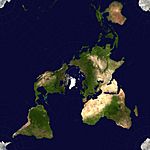 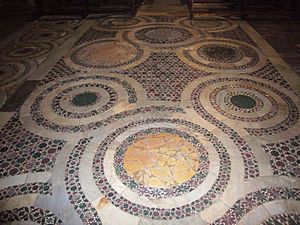 Cosmatesque pavements with the quincunx pattern 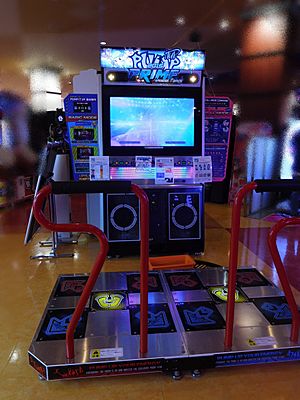 Pump It Up dance pads with tiles arranged quincuncially

All content from Kiddle encyclopedia articles (including the article images and facts) can be freely used under Attribution-ShareAlike license, unless stated otherwise. Cite this article:
Quincunx Facts for Kids. Kiddle Encyclopedia.