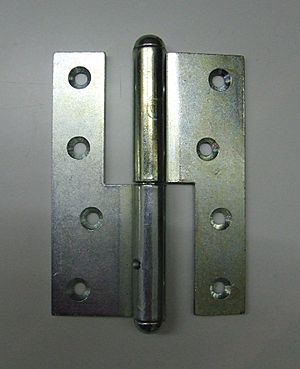 An example of a hinge.

A hinge is something that connects two objects and lets them rotate. The most common examples are the hinges that connect doors to walls or door frames. To open a door on hinges, one pushes the side far from the hinges and the door rotates around the side with hinges.

Hinges can be very large or very small. Small hinges are used for jewellery boxes and other small things with lids. Very large hinges have been used at the bottom of buildings, to let a building sit on loose soil or mud without breaking.

There are many types of door hinges. The main types include:

Spring hinge
a spring-loaded hinge made to provide assistance in the closing or the opening of the hinge leaves. A spring is a component of a hinge, that applies force to secure a hinge closed or keep a hinge opened.
Barrel hinge
a sectional barrel secured by a pivot. A barrel is a component of a hinge, that has a hollow cylinder shaped section where the rotational bearing force is applied to the pivot, and may also have a screw shaped section for fastening and/or driving the pivot.
Pivot hinges
which pivot in openings in the floor and the top of the door frame. Also referred to as a double-acting floor hinge. This type is found in ancient dry stone buildings and rarely in old wooden buildings. These are also called haar-hung doors. They are a low cost alternative for use with light weight doors.

Butt/Mortise hinges
usually in threes or fours, which are inset (mortised) into the door and frame. Most residential hinges found in the U.S. are made of steel, although mortise hinges for exterior doors are often made of brass or stainless steel to prevent corrosion.
Case hinges
Case hinges are similar to a butt hinge however usually more of a decorative nature most commonly used in suitcases, briefcases and the like.

Continuous hinges, or piano hinges
This type of hinge is also known as a piano hinge. It runs the entire length of the door, panel, or box. Continuous hinges are manufactured with or without holes. These hinges also come in various thicknesses, pin diameters, and knuckle lengths.

Concealed hinges
Used for furniture doors (with or without self-closing feature, and with or without damping systems). They are made of two parts: One part is the hinge cup and the arm, the other part is the mounting plate. Also called "cup hinge", or "Euro hinge", as they were developed in Europe and use metric installation standards. Most such concealed hinges offer the advantage of full in situ adjustability for standoff distance from the cabinet face as well as pitch and roll by means of two screws on each hinge.
Butterfly hinges, or Parliament (UK) Hinges
These were known as dovetail hinges from the 17th century onwards and can be found on old desks and cabinets from about 1670 until the 18th century. The form of these hinges varied slightly between manufacturers, and their size ranged from the very large for heavy doors to the tiniest decorative hinge for use on jewellery boxes. Many hinges of this type were exported to America to support the home trade's limited supply. They are still found to be both fairly cheap and decorative, especially on small items.
Flag hinges
A flag hinge can be taken apart with a fixed pin on one leaf. Flag hinges can also swivel a full 360 degrees around the pin. Flag hinges are manufactured as a right hand and a left hand configuration.

Strap hinges
An early hinge and used on many kinds of interior and exterior doors and cabinets.
H hinges
Shaped like an H and used on flush-mounted doors. Small H hinges (3–4 in or 76–102 mm) tend to be used for cabinets hinges, while larger hinges (6–7 in or 150–180 mm) are for passage doors or closet doors.
HL hinges
Large HL hinges were common for passage doors, room doors and closet doors in the 17th, 18th and even 19th centuries. On taller doors H hinges were occasionally used in the middle along with the HL hinges. 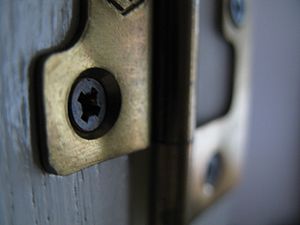 All content from Kiddle encyclopedia articles (including the article images and facts) can be freely used under Attribution-ShareAlike license, unless stated otherwise. Cite this article:
Hinge Facts for Kids. Kiddle Encyclopedia.