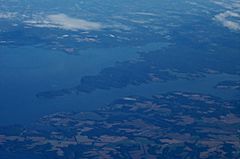 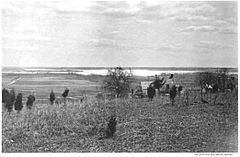 Facing south toward the confluence of Elk and Bohemia Rivers, from Elk Neck Peninsula, c. 1898

Elk Neck Peninsula is in Cecil County, Maryland, between the towns of Elkton and North East, Maryland. Native American and colonial travelers often canoed or sailed up the Chesapeake Bay to Elkton, where the Elk River became unnavigable, and then walked or took some form of surface transportation to the Delaware Bay watershed, since this was the shortest surface crossing. Native Americans of the area, including the Nanticoke and Lenni Lenape, hunted and fished, as well as established semi-permanent camps.

All content from Kiddle encyclopedia articles (including the article images and facts) can be freely used under Attribution-ShareAlike license, unless stated otherwise. Cite this article:
Elk Neck Peninsula Facts for Kids. Kiddle Encyclopedia.