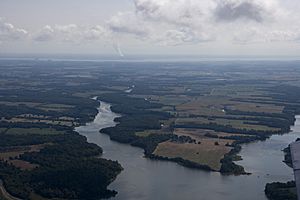 The Bohemia River is a 4.7-mile-long (7.6 km) tributary of the Elk River on the Delmarva Peninsula. It is located in Cecil County, Maryland, with its headwaters extending into New Castle County, Delaware.

The Bohemia River was once known as the Oppoquimimi River, as it was known by Native Americans. The river was renamed by Augustine Herman after Bohemia, the country of his birth.

All content from Kiddle encyclopedia articles (including the article images and facts) can be freely used under Attribution-ShareAlike license, unless stated otherwise. Cite this article:
Bohemia River Facts for Kids. Kiddle Encyclopedia.