Rising Sun is a town in Cecil County, Maryland, United States. The population was 2,781 at the 2010 census.

The town which became known as Rising Sun was located in the disputed “Nottingham Lots” along the border between colonial Pennsylvania and Maryland. This area was claimed by William Penn and settled by Quakers in 1702 over the objection of Maryland. When Charles Mason and Jeremiah Dixon conducted a survey of the order in the 1760s, Rising Sun was found to be located in Maryland.

Around 1720, Henry Reynolds established a stone tavern on Nottingham Lot No. 17 to serve as a stage coach stop. According to local lore, he erected a sign over the entrance of the tavern depicting the rays of the sun at dawn and the words "The Rising Sun". As the tavern was located along the route between Baltimore and Philadelphia, it became known as a meeting place for business, politics, elections, and other public activities. Local legend states that the tavern was more well known than the surrounding village (Summer Hill) so that by the time the town’s first post office was established around 1815, Rising Sun was chosen as the official name. There is some conjecture that the post office was located in the tavern.

When the town’s incorporation in 1860, the commissioners had slate sidewalks installed, erected street lamps, and hired a lamplighter who doubled as bailiff and street maintenance man. Six years later the Philadelphia and Baltimore Central Railroad began to serve Rising Sun. Most of the town’s current structure has been built since then. 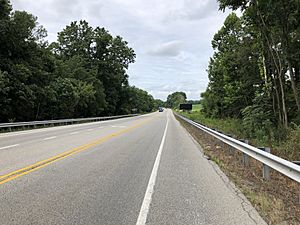 US 1 southbound in Rising Sun

Roads are the primary method of travel to and from Rising Sun. The most prominent highway serving Rising Sun directly is U.S. Route 1, which skims the northwest edge of town. Heading south, US 1 heads across the Conowingo Dam on its way towards Baltimore, while to the north, US 1 enters Pennsylvania on its journey towards Philadelphia. Other highways which pass through Rising Sun include Maryland Route 273 and Maryland Route 274. Maryland Route 276 passes just outside the town limits.

All content from Kiddle encyclopedia articles (including the article images and facts) can be freely used under Attribution-ShareAlike license, unless stated otherwise. Cite this article:
Rising Sun, Maryland Facts for Kids. Kiddle Encyclopedia.