Port Deposit is a town in Cecil County, Maryland, United States. It is located on the east bank of the Susquehanna River near its discharge into the Chesapeake Bay. The population was 653 at the 2010 census.

The first recorded European visits to the area were the 1608 and 1609 expeditions led by Captain John Smith up the Chesapeake Bay. He sailed up the Susquehanna River from the Bay about 2 miles (3.2 km) to the present location of Port Deposit, and gave the name of "Smythe Fayles" to the rapids just above the future town. 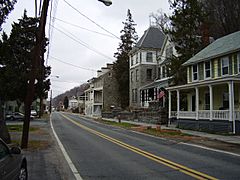 In 1729, Thomas Cresap established a regular ferry service near Smith's Falls (in the upper Port Deposit area) crossing the Susquehanna to Lapidum; this was referred to as Smith’s Ferry or Upper Ferry. In 1731, a road from Susquehanna Upper Ferry toward Philadelphia, as far as the jurisdiction extends, was authorized. In the same year, in the jurisdiction south of the river, a petition was submitted for a road from the mill at 'Rock Run' to Peach Bottom, Pennsylvania. This upper ferry was later purchased by Colonel John Creswell and came to be known as 'Creswell's Ferry'.

This location and Lapidum across the river were the northern-most navigable deepwater ports on the Susquehanna. Ships from the Chesapeake met river barges and wagons loaded with lumber, grain, coal, whiskey, tobacco and other goods floated downriver to this "port of deposit." In the early days, it was difficult to float goods downriver, since there were many rapids and hazards, but it remained the most convenient way for goods to leave much of the country drained by the Susquehanna above the falls. Further, since a number of roads converged at the ferry crossing, goods could be carted or “rolled.”<

As early as the 1790s, the forests on the Susquehanna were being logged and the timbers floated downriver to points near the ferry landing. In 1812, the town was platted as Creswell’s Landing. That same year Governor Levin Winder signed the bill changing the name from Creswell’s Landing to Port Deposit to prevent the continued confusion resulting from multiple unofficial names.

The Susquehanna Canal (which had several owners and names over the years, including the Maryland Canal) was completed in 1812 and contributed much toward the town's growth. Until the canal was placed in service bypassing Smith's Falls, most of the traffic stopped at Lapidum, across the Susquehanna River since it was easier to run the rapids on the south side. However, the new canal — the Susquehanna and Tidewater Canal on the north side of the river — funneled the barge traffic into Port Deposit, stimulating rapid growth. 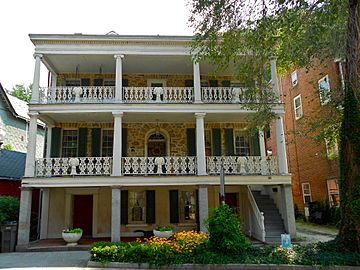 The Gerry House was built in 1812. Lafayette was entertained here in 1824.

The first attempts to bridge the Susquehanna in Maryland were made by the Port Deposit Bridge Company, incorporated in 1808. Its attempts failed, so the Legislature in 1812 authorized another company to proceed. After completing a survey in 1813, which included the first written reference to Port Deposit, the company proposed a location that complied with the law but was longer than necessary. After petitioning for relief, the company was allowed to route the bridge closer to the falls, allowing it to be 1,000 feet (300 m) shorter. The Port Deposit Bridge, a wooden covered bridge, was built just north of Port Deposit between 1817 and 1818. Put into service in 1818, it was the earliest bridge crossing of the Susquehanna. Rebuilt after a span burned in 1823, it remained in service until 1857.

An 4 acres (16,000 m2) site at the north end of Port Deposit was condemned to quarrying "granite." (actually gneiss) for bridges. The general area had been the site for granite quarrying before the bridge was constructed as there was use of this specific granite in buildings constructed before the Revolutionary War. This granite can be seen in many of the distinctive buildings in Port Deposit today.

Quarries were also opened here in 1829 by the proprietors of a competitor canal, the Susquehanna and Tidewater Canal between Havre de Grace, Maryland and Wrightsville, Pennsylvania, for canal construction projects routed along the opposite bank of the Susquehanna.

These quarries continued in service well into the 20th century. Port Deposit Gneiss was used in: 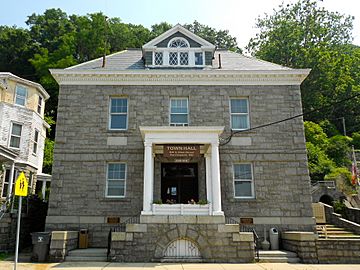 Port Deposit was incorporated in 1824.

Arrival of the railroad

In 1832 the Maryland General Assembly chartered the Delaware and Maryland Rail Road Company to build from Port Deposit on the Susquehanna River to the Delaware state line. The Wilmington and Susquehanna Rail Road Company was also chartered in 1832 in Delaware, to continue the line to Wilmington. The two companies merged in 1836 to form the Wilmington and Susquehanna Railroad Company. The Baltimore and Port Deposite Rail Road Company, which would constitute the remainder of the route to Baltimore, was chartered in Maryland in 1832. On February 12, 1838, the three companies merged to form a new Philadelphia, Wilmington and Baltimore Railroad Company, authorized to build a continuous line from Philadelphia to Baltimore. The main line passed southeast of Port Deposit; the town was connected by a branch line in 1866, running along the riverbank from Perryville. In 1881 the PW&B came under the control of the Pennsylvania Railroad (PRR). In 1893 the branch line was sold to the Columbia and Port Deposit Railway, also PRR-controlled.

Jacob Tome, a banker, philanthropist, and politician, arrived in Port Deposit a penniless man. At his death was one of the richest men in the United States. It is a comment on the character of Port Deposit that he rose to become Cecil County's first millionaire as well as its greatest philanthropist. The Tome mansion (built in 1850 but no longer standing) was the largest house in the town. He founded the Tome School, originally on Main Street in Port Deposit, in 1889. He died on March 16, 1898 in Port Deposit, leaving a substantial endowment for the Jacob Tome Institute. After 1898 the Jacob Tome School for Boys built a series of beaux arts granite buildings on the bluffs above Port Deposit, overlooking the Susquehanna River. The CP-TOME interlocking on the railroad line through downtown Port Deposit is named in his honor.

The Susquehanna River drops 167 feet (51 m) as it passes through the region above Port Deposit, as it cuts though the hard rock of the region. This characteristic, which had long been good for Port Deposit, also attracted power companies in the boom period after World War I. The Conowingo Dam, built in 1927, permanently changed the character of the town by terminating all river traffic and decimating what was left of the shad and herring fishery which was once found there. Port Deposit benefited from the dam as well; destructive accumulations of ice (referred to as ice gouges) no longer accumulated in the Conowingo Rapids or passed through Port Deposit, as it had to terrible effect in 1907.

Formerly a major industry in Port Deposit, Wiley's Manufacturing, fabricated the Fort McHenry Tunnel sections. They were floated and towed to the Baltimore construction site using tugboats. Construction was completed in 1985.

The immersed tubes of the 63rd Street Tunnel were fabricated at a shipyard in Port Deposit and then towed to New York City. 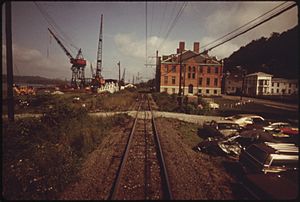 Washington Hall as viewed from the Washington section of Amtrak's Broadway Limited in 1974.

The entire town of Port Deposit was listed as a historic district on the National Register of Historic Places on May 23, 1978. Starting from Bainbridge Road on the south, the district extends about 1.4 miles north along US 222 to the quarry at the north end of town.

The town has several impressive older buildings, many built of the local granite or brick. The oldest structures in the historic district date from 1725, with the majority built from 1830 through the 1890s.

The town remained largely unspoiled by new construction until the late 20th century, since there was little room for construction. The bulk of the older buildings line the main street and the, until recently, single side street built in the narrow space between the bluffs and the river. The bluffs have been terraced and stairways lead between streets. Adams Hall, formerly part of the Tome Institute, became the Town Hall; the only remains of the Tome Institute's former Washington Hall is the granite doorway that separates the Main Street from a parking lot today.

There were 265 households of which 26.0% had children under the age of 18 living with them, 35.8% were married couples living together, 14.0% had a female householder with no husband present, 7.9% had a male householder with no wife present, and 42.3% were non-families. 30.6% of all households were made up of individuals and 5.7% had someone living alone who was 65 years of age or older. The average household size was 2.39 and the average family size was 2.89.

There were 264 households out of which 29.9% had children under the age of 18 living with them, 34.1% were married couples living together, 21.6% had a female householder with no husband present, and 37.9% were non-families. 29.5% of all households were made up of individuals and 9.5% had someone living alone who was 65 years of age or older. The average household size was 2.50 and the average family size was 3.08.

All content from Kiddle encyclopedia articles (including the article images and facts) can be freely used under Attribution-ShareAlike license, unless stated otherwise. Cite this article:
Port Deposit, Maryland Facts for Kids. Kiddle Encyclopedia.