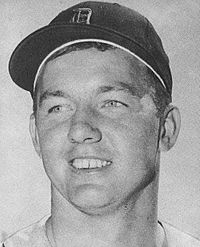 Albert William Kaline (December 19, 1934 – April 6, 2020), nicknamed "Mr. Tiger", was an American baseball player. He played as a right fielder. He played in Major League Baseball (MLB) between 1953 and 1974 for the Detroit Tigers. He was an 18-time All-Star and one-time World Series champion in 1968. He also won the Rawlings Gold Glove Award ten times. He is a member of the Baseball Hall of Fame.

Kaline was born in Baltimore, Maryland. He was married to Madge Louise Hamilton. The couple had two children.

All content from Kiddle encyclopedia articles (including the article images and facts) can be freely used under Attribution-ShareAlike license, unless stated otherwise. Cite this article:
Al Kaline Facts for Kids. Kiddle Encyclopedia.