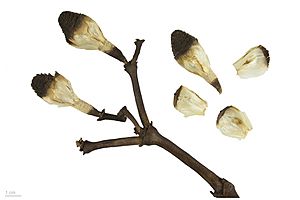 Welwitschia or Welwitschia mirabilis is known as one of the oldest living plants. It can be called a "living fossil". The plant is mainly found in the deserts of Namibia. Some of these plants may be more than 5000 years old. This would make them the oldest living things on Earth.

It is named after the discoverer, Dr. Friedrich Welwitsch. The plant is locally called "long haired thing". Its structure consists of a short, woody, top-shaped stem, and never more than two leaves, which are enormously long, (two or three metres) and break up at the ends.

All content from Kiddle encyclopedia articles (including the article images and facts) can be freely used under Attribution-ShareAlike license, unless stated otherwise. Cite this article:
Welwitschia Facts for Kids. Kiddle Encyclopedia.