Tinder Polypore growing on a tree

Underside of a polypore

A polypore is a hard, brittle mushroom with pores underneath its cap. It usually grows on rotted logs and tree stumps but may also be found on living trees. It may or may not have a stem and sometimes has many caps growing from one stem. Some polypores last so long that they have moss growing from them.

Polypore is from Greek poly meaning "many" and pore - literally "many pores". 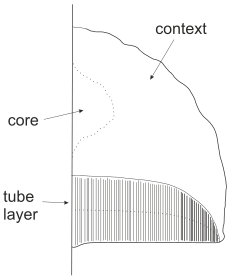 The fungal individual that develops the fruit bodies that are identified as polypores resides in soil or wood as mycelium. Polypores are often restricted to either deciduous (angiosperm) or conifer (gymnosperm) host trees. Some species depend on a single tree genus (e.g. Piptoporus betulinus on birch, Perenniporia corticola on dipterocarps).

Structure of the fruit bodies is simple. Effused or resupinate fruit bodies typically consist of two layers - a tube layer of vertically arranged tubes that open downwards, and supporting layer called subiculum that supports and attached the tubes to substrate. In fruit bodies with a cap (pileate fruit bodies) the tissue between upper surface and the pore layer is called context. A few polypores (e.g. Fomes fomentarius and Inocutis rhaedes) also have a core between context and substrate. A minority of polypores also have a stalk (stipe) that attach to the cap either laterally or centrally depending on the species.

Polypore tubes are a honey-comb-like structure, where the individual tubes have fused together. Their sides are covered with a spore-forming surface, the hymenium. The tubes offer shelter for developing spores and help to increase the area of the spore-producing surface. Pore size and shape vary a lot between species, but little within a species – some Hexagonia spp. have 5 mm wide pores whereas pores of Antrodiella spp. are invisible to naked eye with 15 pores per mm. Generally the larger the pores, the larger the spores. A few polypores produce asexual spores (chlamydospores or conidia) in the upper surface of their cap (e.g. Echinopora aculeifera, Oligoporus ptychogaster) or without the presence of a sexual fruit body (e.g. Inonotus rickii, Heterobasidion spp.).

All content from Kiddle encyclopedia articles (including the article images and facts) can be freely used under Attribution-ShareAlike license, unless stated otherwise. Cite this article:
Polypore Facts for Kids. Kiddle Encyclopedia.