The department is divided into 6 communes. Each commune is centered at one of the main towns: Banikoara, Gogounou, Kandi, Karimama, Malanville, and Ségbana. The department borders the countries of Burkina Faso, Niger, and Nigeria.

The département was made in 1999 when it was split off from Borgou. Since 2008, the capital has been Kandi. 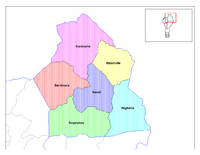 All content from Kiddle encyclopedia articles (including the article images and facts) can be freely used under Attribution-ShareAlike license, unless stated otherwise. Cite this article:
Alibori Department Facts for Kids. Kiddle Encyclopedia.