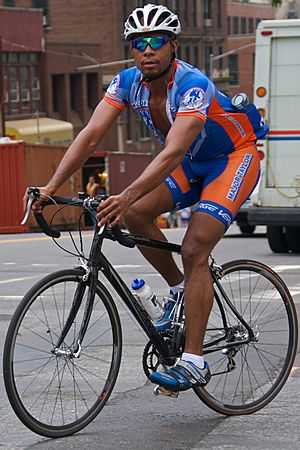 Cyclist wearing shorts and a shirt made of lycra.

Lycra is a type of synthetic fabric that is very elastic. It is also called Spandex or elastane. The name "spandex" is an anagram of the word "expands".

Lycra was invented in 1958 , United States. It was invented by Joseph Shivers, a chemist. It is made from a combination of polyester and polyurethane.

Because of its elasticity and strength, lycra is often used to make clothing. It is commonly mixed with cotton to make things like tights, bras and underwear. Lycra is especially common in sports clothing, such as wrestling singlets. It is also often used to make swimsuits and wetsuits, because lycra dries more quickly than many other fabrics.

All content from Kiddle encyclopedia articles (including the article images and facts) can be freely used under Attribution-ShareAlike license, unless stated otherwise. Cite this article:
Lycra Facts for Kids. Kiddle Encyclopedia.