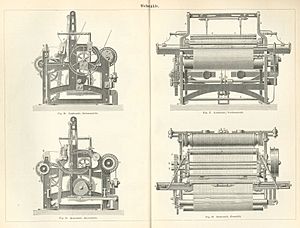 The term power loom, corresponds to a mechanized loom powered by a driveshaft. The first power loom was designed in 1784 by Edmund Cartwright and first built in 1785, later to be perfected by William Horrocks. It allowed textile making to be done far faster than if a human had done the same work. By 1850, over 250,000 of Cartwright's designs were used in England. James Henry Northrop invented the automatic "weft replenishment" loom. It revolutionized the weaving industry. Some 700,000 "Northrop" automatic looms were sold worldwide.

Originally, power looms used a shuttle to throw the weft across, but in the early part of the 20th century the faster and more efficient shuttleless loom came into use. Today, advances in technology have produced a variety of looms designed to maximize production for specific types of material. The most common of these are air-jet looms and water-jet looms. Computer-driven looms are now also available to individual home weavers.

All content from Kiddle encyclopedia articles (including the article images and facts) can be freely used under Attribution-ShareAlike license, unless stated otherwise. Cite this article:
Power loom Facts for Kids. Kiddle Encyclopedia.