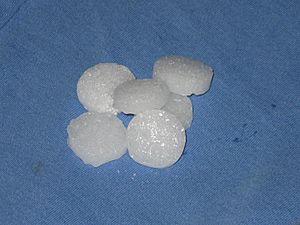 Mothballs are small balls of chemical pesticide and deodorant.They are used when clothing and other articles susceptible to damage from mold or moth larvae are stored. Older mothballs were made primarily of naphthalene. Because naphthalene can catch fire easily, modern mothballs use 1,4-dichlorobenzene instead. Both of these ingredients have a strong, pungent smell often associated strongly with mothballs. Camphor, an insect repellent, can also be used in mothballs.

Their use when clothing is stored out-of-season led to the colloquial usage of the terms mothballed and put into mothballs to refer to anything which is put into storage or whose operation is suspended. Some claim that the use of the word in this sense derives from naval usage. When warships were laid up, the open ends of their gun barrels and other openings were covered in white material to prevent the entry of water. These white circles suggested mothballs.

All content from Kiddle encyclopedia articles (including the article images and facts) can be freely used under Attribution-ShareAlike license, unless stated otherwise. Cite this article:
Mothball Facts for Kids. Kiddle Encyclopedia.