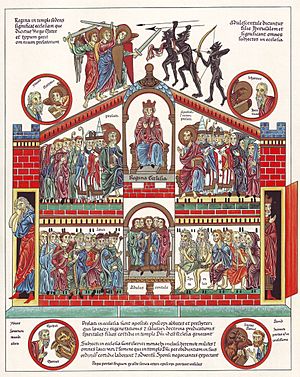 Medieval illustration of the ecclesia from the Hortus deliciarum of Herrad of Landsberg (12th century) apologetics organization
This page is about the local church group. For the building, see Church. For the worldwide body of Christians, see Christian Church. For other uses of the word "church", see Church (disambiguation).

A Christian church (or local church) is a group of people who share a faith or belief within a community. They usually meet in one particular location called a cathedral, temple, tabernacle, or simply a church building. A church group represents a certain doctrine and traditions. Many Christian churches that use the same name and share the same beliefs are a part of a denomination. A church that not part of a larger group is usually called nondenominational. There are estimated to be over 41,000 denominations worldwide. They may fall within three general groups: Orthodox, Catholic and Protestant Churches.

Many Christians believe that churches began on the Day of Pentecost. This is found in the book of Acts in the Bible. The first time the word church is found in the Bible is in Matthew 16:18, when Jesus said, "You are Peter, a rock. This is the rock on which I will put together my church, a church so expansive with energy that not even the gates of hell will be able to keep it out." The Apostle Paul wrote letters to several churches in different cities. These letters later became books of the New Testament.

All content from Kiddle encyclopedia articles (including the article images and facts) can be freely used under Attribution-ShareAlike license, unless stated otherwise. Cite this article:
Christian church Facts for Kids. Kiddle Encyclopedia.