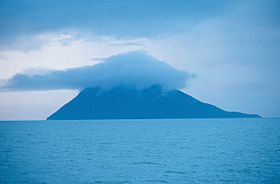 Kayak Island, (Eyak: Qe'yiłteh) which includes the Bering Expedition Landing Site, is located in the Gulf of Alaska, 100 km (62 mi) SE of Cordova, Alaska Malaspina Coastal Plain, on the eastern edge of Chugach National Forest. It has a land area of 73.695 km2 (28.454 sq mi) and no population.

It was named "Kayak" in 1826 by Lt. Sarichef of the Russian Navy, because of the fancied resemblance of its outline to the Eskimo skin canoe. This island, made the first attempts at contact between Europeans and Alaskan natives. His investigations are among the first contributions to the West's knowledge of the natural and human history of the region."

Captain James Cook visited the island on May 12, 1778, and buried a bottle with a paper and two small pieces of silver given to him by Dr. Richard Kaye, the chaplain of King George III, for this purpose. Because of this, Capt. Cook gave the name this feature. The 1779 expedition of Spanish explorer Ignacio de Arteaga y Bazán sighted the island about July 16, the feast day of Our Lady of Mt. Carmel (or Carmen), and so named it "Nuestra Senora del Carmen" or "Isla del Carmen."

The Bering Expedition Landing Site was declared a National Historic Landmark in 1978.

Cape Saint Elias is located on the southwest end of the island. Mount Saint Elias — about 115 miles to the ENE, and at 18,009 feet (5,489 m) the second highest mountain in both the United States and Canada — was likely named after this cape. The cape is also the site of Alaska's first confirmed tornado, which caused minor damage to the area on November 4, 1959. It was the 50th and last state to confirm their first tornado since 1950.

The Cape St. Elias Light is an important aid-to-navigation located on the island.

All content from Kiddle encyclopedia articles (including the article images and facts) can be freely used under Attribution-ShareAlike license, unless stated otherwise. Cite this article:
Kayak Island Facts for Kids. Kiddle Encyclopedia.