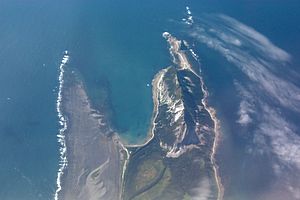 In October 1913, Congress allocated $115,000 to construct a lighthouse on the cape. Construction occurred from 1915 through 1916 and a third order Fresnel Lens was put in place. At the time, this was the second such facility in Alaska.

The cape is also the site of Alaska's first confirmed tornado, which caused minor damage to the area on November 4, 1959. It was the 50th and last state to confirm their first tornado since 1950.

All content from Kiddle encyclopedia articles (including the article images and facts) can be freely used under Attribution-ShareAlike license, unless stated otherwise. Cite this article:
Cape Saint Elias Facts for Kids. Kiddle Encyclopedia.