Lituya Bay (/lɪˈtjuːjə/; Tlingit: Ltu.aa, meaning 'lake within the point') is a fjord located on the coast of the south-east part of the U.S. state of Alaska. It is 14.5 km (9 mi) long and 3.2 km (2 mi) wide at its widest point. The bay was noted in 1786 by Jean-François de Lapérouse, who named it Port des Français. Twenty-one of his men perished in the tidal current in the bay.

The smaller Cascade and Crillon glaciers and the larger Lituya Glacier all spill into Lituya Bay, which is a part of Glacier Bay National Park and Preserve. Cenotaph Island is located roughly in the middle of the bay. The entrance of the bay is approximately 500 m (0.31 mi) wide, with a narrow navigable channel.

The bay is known for its high tides, which have a range of approximately 3 m (9.8 ft). Tidal currents in the entrance reach 9.4 km/h (5.1 kn). The entrance is considered dangerous to navigation, especially when the tidal currents are running, but the interior of the bay provides good protection to anchored ships.

The bay (spelled "Latuya") is mentioned in Jack London's short story, "The Unexpected". 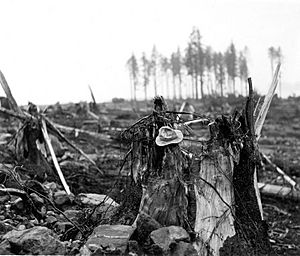 Spruce tree shattered by the force of the water

The same topography that leads to the heavy tidal currents also created the tsunami with the highest runup against a hillside in recorded history. On July 9, 1958, an earthquake caused a landslide in the Gilbert Inlet at the head of the bay, generating a massive megatsunami which had sufficient energy to run up the hill slope just opposite of the landslide to a height measuring 1,722 feet (525 m), taller than the Empire State Building. There were three fishing boats anchored near the entrance of Lituya Bay on the day the giant wave occurred. One boat (the Sunmore) was sunk by the wave and debris as it attempted to exit the bay, and the two people on board (a married couple, the Wagners) were killed. The second boat (the Badger) was carried across the la Chasseuse, spit into the ocean, hit by a floating log and sunk but not before its occupants (a married couple, the Swansons) in spite of injuries, managed to board a skiff ultimately to be rescued. The third boat, the Edrie, crewed by father and son the Ulriches, was anchored at the opposite side of the bay entrance. The father, Howard, turned the boat to face the wave, which picked her up, snapped her anchor chain, carried her above the trees but then washed her back into the bay with no major damage. William A. Swanson and Howard G. Ulrich provided accounts of what they observed. Based on Swanson's description of the length of time it took the wave to reach his boat after overtopping Cenotaph Island near the bay's entrance, the wave may have been traveling 120 mph (190 km/h). When it reached the open sea, however, it dissipated quickly. This incident was the first direct evidence and eyewitness report of the existence of megatsunamis.

All content from Kiddle encyclopedia articles (including the article images and facts) can be freely used under Attribution-ShareAlike license, unless stated otherwise. Cite this article:
Lituya Bay Facts for Kids. Kiddle Encyclopedia.