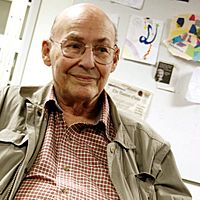 Marvin Lee Minsky (August 9, 1927 – January 24, 2016) was an American cognitive scientist in the field of artificial intelligence (AI). He was the co-founder of the Massachusetts Institute of Technology's AI laboratory, and author of several texts on AI and philosophy. He won the Turing Award in 1969.

Minskey was born in New York City, New York. He studied at Phillips Academy, Harvard University and at Princeton University. Minskey died in Boston, Massachusetts of a cerebral hemorrhage on January 24, 2016 at the age of 88. His body is chronologically frozen in Scottsdale, Arizona.

All content from Kiddle encyclopedia articles (including the article images and facts) can be freely used under Attribution-ShareAlike license, unless stated otherwise. Cite this article:
Marvin Minsky Facts for Kids. Kiddle Encyclopedia.