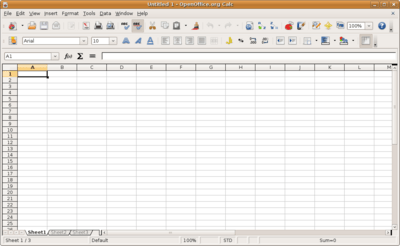 A Spreadsheet is a computer program that imitates a paper worksheet. It shows a large sheet (like a sheet of paper) that has many cells in a grid of rows and columns. Users can put words or numbers into the cells, to make headings and store information (usually numbers). You can also move the grid lines around so that some cells are bigger than others, and change the color or size of text/font, the same way font/text is changed in a word processor. You can even put pictures in the worksheets, make multiple pages, and print out their results on real paper.

The primary reason most people use spreadsheets is for automatic calculations. Spreadsheets can be designed to add up the items/amounts on a bill, calculate sales tax, and even calculate income tax. A user can add and subtract the numbers here, even if the numbers are not next to each other. This means the computer does all the math, and people only need to give the correct information.

Another strength of spreadsheets, is that they can produce diagrams, like graphs and pie-charts, based on the data the user enters. Sometimes the numbers make more sense when the computer turns them into a picture.

All content from Kiddle encyclopedia articles (including the article images and facts) can be freely used under Attribution-ShareAlike license, unless stated otherwise. Cite this article:
Spreadsheet Facts for Kids. Kiddle Encyclopedia.