iWork is a suite of programs created by Apple Inc., containing Pages, a word processing and desktop publishing program, Keynote, a presentation package and Numbers, a spreadsheet program.

Although iWork is called "a successor to AppleWorks" by Apple, it does not have the functions of AppleWorks's database and drawing tools. Also, it does not compete directly with the Mac version of Microsoft Office, but instead offers tools with a different focus (presentation, rather than analysis) at a lower price. It is made to integrate with other applications from Apple's iLife Suite. Although iLife comes free on every Mac, iWork is sold separately. A free 30-day trial of iWork was given with every new Mac (up through February of 2008—as of March 2008, but now the iWork trial is available only as a download), and with copies of iLife. 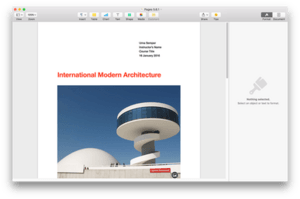 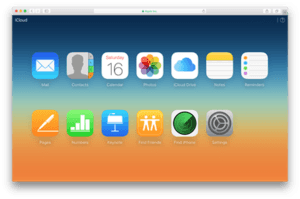 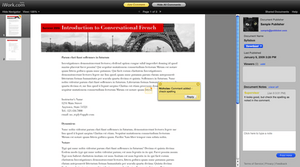 iWork '05 was launched on January 11, 2005 and had the new version 2 of Keynote and the first release of Pages. Before it was released, what would become iWork was said to be an add-on, upgrade, or new release of AppleWorks.

On January 10, 2006, Apple introduced iWork '06 at the Macworld Expo in San Francisco, which upgraded Pages to version 2 and Keynote to version 3. New features common to both applications included 3D charts, tables with formula support, reviewer comments, and shaped image masking. The addition of tables with formula support may have been added to quiet rumors of an Apple spreadsheet application. Since iWork's focus is on presentation, Apple gave a way to put most common spreadsheet features into a table while providing only limited additional functionality.

iWork '08 was announced on August 7, 2007 at a special event at Apple's Cupertino campus. New versions of Pages and Keynote were introduced, as was a new spreadsheet application, Numbers. Despite this, hard disk space requirements were reduced from 1.85 GB in iWork '06 to 690 MB in iWork '08. iWork '08 was the end of AppleWorks which was not sold anymore a week later. iWork 08 drops support for Mac OS X v10.3 'Panther'.