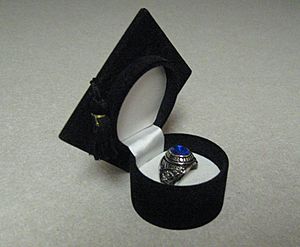 A class ring in a ring case. This ring is made of white ultrium and contains a synthetic sapphire gemstone. 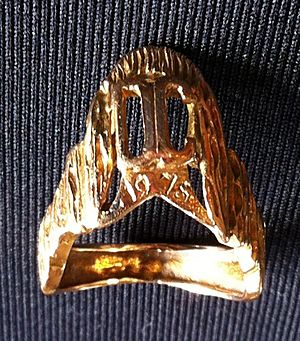 A class ring (also known as a graduation, graduate, senior, or grad ring) is a ring worn by students and alumni to commemorate their graduation, generally for a high school, college, or university.

Today class rings can be customized, from the material and style that the ring is made of to the color and cut of the gem in the center. There is a wide selection of emblems, pictures, and words that can be added to the sides of the rings and even inside the center gem.

The tradition of class rings originated with the class of 1835 at the United States Military Academy at West Point.

The Complete Book of Etiquette by Amy Vanderbilt indicates the following protocol for wearing of a class ring: For as long as the wearer is in school, the insignia should face the wearer to remind him/her of the goal of graduation. Upon graduation, the class ring gains the status of a "badge of honor" similar to a diploma, with the effect that graduation entitles the wearer to display the insignia facing outward so that it faces other viewers.

A notable exception to this protocol is the custom followed by older graduating classes of the United States Military Academy at West Point: Today, as in years past, Academy graduates frequently wear their rings on the left hand in observance of the ancient belief, which also underlay the Anglo-American custom of wearing wedding bands on the left hand, that a vein connects the left ring finger to the heart. Prior to graduation, these classes wore the USMA Class Ring with the Class Crest closest to the heart, signifying a given cadet's bond to his class within the Academy.

All content from Kiddle encyclopedia articles (including the article images and facts) can be freely used under Attribution-ShareAlike license, unless stated otherwise. Cite this article:
Class ring Facts for Kids. Kiddle Encyclopedia.