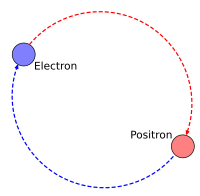 An electron and positron orbiting around their common centre of mass. (An s state has zero angular momentum; so orbiting around each other would mean going straight at each other until scattered or until annihilation, whichever comes first). This is a bound quantum state known as positronium.

Positronium is a type of exotic atom that is made of one positron and one electron. They both stay in the same orbital. Less than one second after it is created the Positronium is destroyed and it forms two gamma rays.

All content from Kiddle encyclopedia articles (including the article images and facts) can be freely used under Attribution-ShareAlike license, unless stated otherwise. Cite this article:
Positronium Facts for Kids. Kiddle Encyclopedia.