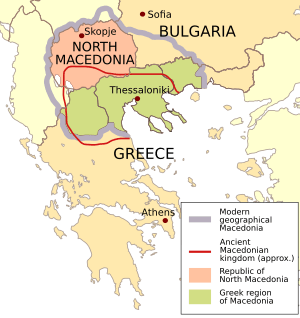 The Macedonia naming dispute was a political dispute between Greece and North Macedonia. The disputed was because of the name “Macedonia”. It was solved in 2019 with the prespa agreement when Greek prime minister Alexis Tsipras and Macedonian prime minister Zoran Zaev signed the agreement along border Lake Prespa.

All content from Kiddle encyclopedia articles (including the article images and facts) can be freely used under Attribution-ShareAlike license, unless stated otherwise. Cite this article:
Macedonia naming dispute Facts for Kids. Kiddle Encyclopedia.