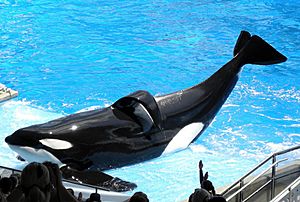 Tilikum (c. November 1981 – January 6, 2017), nicknamed Tilly, was an orca, or killer whale. He was notable for his role in the deaths of three humans, including two trainers. The first death, in 1991, was a trainer at the Sealand of the Pacific in Victoria, British Columbia, Canada. In 1992, he was moved to SeaWorld in Orlando, Florida, United States. In 1999, Tilikum killed a trespasser in his inclosure. In 2010, Tilikum killed trainer Dawn Brancheau. This would lead to the documentary movie Blackfish being based on Tilikum.

Born in 1981, Tilikum was captured in 1983 at Hafnarfjörður, near Reykjavík, Iceland.

Tilikum died on January 6, 2017 at SeaWorld Orlando of a bacterial infection, aged 35.

All content from Kiddle encyclopedia articles (including the article images and facts) can be freely used under Attribution-ShareAlike license, unless stated otherwise. Cite this article:
Tilikum (orca) Facts for Kids. Kiddle Encyclopedia.