Didsbury is a town in central Alberta, Canada, at the foothills of the Rocky Mountains. It is located next to Alberta Highway 2A, near the Queen Elizabeth II Highway, Didsbury is within the Calgary-Edmonton corridor. Didsbury is approximately the half-way point between the cities of Calgary and Red Deer.

Didsbury is surrounded by Mountain View County, which has its municipal office located to the north of the town. The nearest neighbouring communities are the towns of Olds to the north and Carstairs to the south. 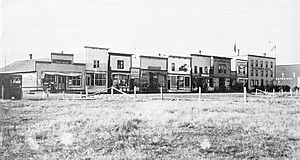 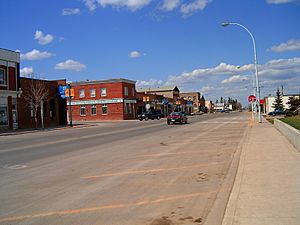 The town is named after the township of Didsbury, now a suburban area of Manchester, England. The first settlers were Dutch Mennonites who left their homes in Pennsylvania and emigrated as United Empire Loyalists to Waterloo County, Ontario. They were granted the area around Didsbury in 1894 by the government of Sir John A. Macdonald.

Original settlement in the area was sparse, and this in part explains the initial slow development of the town-site as a service centre. The first concern of the Mennonite settlers was to build a church; and the primary task of the settlers was to create farmsteads. Settlement prior to the post-1900 land rush was limited to the small group who came west in 1894.

1897 saw the arrival of the Canadian Pacific Railway, which pushed forward the town's development. The CPR constructed a station in the town in 1904. Didsbury was incorporated as a village in 1905 and as a town on September 6, 1906.

Fires in 1914 and 1924 destroyed the early "boomtown" commercial streetscape and led to the passing by Town Council of a bylaw which required masonry construction for all new downtown commercial buildings. Many of these brick buildings stand today.

The population of the Town of Didsbury according to its 2008 municipal census is 4,599.

Didsbury is home to the Mountainview Colts of the Heritage Junior B Hockey League.

Organizations present in Didsbury include the Royal Canadian Army Cadets and the 1st Didsbury Scouts, Didsbury Jazzercise, as well as the Elks and Lions clubs.

All content from Kiddle encyclopedia articles (including the article images and facts) can be freely used under Attribution-ShareAlike license, unless stated otherwise. Cite this article:
Didsbury, Alberta Facts for Kids. Kiddle Encyclopedia.