Cardston is a town in Alberta, Canada. The land on which Cardston was founded was originally inhabited by the Niitsitapi (Blackfoot) people of Kainai but was not considered part of Blackfoot Territory by the Government of Canada in the Treaty 7 agreement of 1877.

Cardston was established in 1887 by members of The Church of Jesus Christ of Latter-day Saints (LDS Church) who travelled from Utah, via the Macleod-Benton Trail, to present-day Alberta in one of the century's last wagon migrations. The founder of the town was Charles Ora Card. The combined church and school was completed by January 29 the year following their arrival.

Cardston is situated in the low foothills of southwest Alberta, approximately 25 km (15.53 mi) north from the American state of Montana. On its north side, it borders the Kainai Nation (Blood Tribe) Indian Reservation, one of the largest reserves in North America. 40 km (24.85 mi) to the west of Cardston are the Rocky Mountains of Waterton Lakes National Park. Cardston is 77 km (47.85 mi) southwest of Lethbridge and 234 km (145.40 mi) south of Calgary.

Source: Statistics Canada 2001 Census (numbers may not add up due to rounding)

Cardston experiences a humid continental climate (Köppen climate classification Dfb). Along with the rest of southern Alberta, Cardston is subject to chinooks, which often bring temperatures in mid-winter well above 10 °C (50 °F). This same pattern results in more than 200 days of wind a year.

Remington Carriage Museum
The Remington Carriage Museum houses the largest collection of horse-drawn vehicles in North America, with more than 250 carriages, wagons and sleighs. The 63,000-square-foot (5,900 m2) facility features video displays, a fire hall, carriage factory, restoration shop, working stable, carriage rides, carriage rentals, a restaurant, and a gift shop. Guided tours are offered for free. On April 9, 2006, the museum was briefly mentioned on TV in Canada as a destination of Patty and Selma's vacation during the Kiss Kiss, Bang Bangalore episode of The Simpsons.

The Carriage House Theatre
This theatre was constructed in 1912 by Mark Spencer, and underwent renovations in 1937 and 1992. It seats 350 and hosts films, community theatre and professional summer theatre, which has produced such shows as Seussical, Oklahoma, and Joseph and the Amazing Technicolor Dreamcoat.

Card Pioneer Home
A genuine "Little House on the Prairie", it was built by Cardston’s founder Charles Ora Card in 1887, and served as a community centre and stopping place for travellers until the first hotel was built in 1894. The log structure stands in its original location and is open for public visits as a Registered Provincial Historic site.

Courthouse Museum
The Courthouse Museum shows how a rough country changed dramatically. The unique sandstone structure was built in 1907 from stone quarried near Cardston. The building’s profile and interior stand as a monument to Cardston’s early pioneer artisans. It was used longer than any other courthouse in Alberta. The building displays the judge's bench, witness box, and other artifacts. Original jail cells, including graffiti, can be found. The Courthouse Museum is a Registered Provincial Historic site

On April 29, 1903, at 4:10 a.m., the mining town of Frank, Alberta, was devastated by 82 million tonnes of limestone crashing down from Turtle Mountain. The Frank Slide Interpretative Centre in the Crowsnest Pass, 130 km (81 mi) northwest of Cardston, tells of one of the geatest natural disasters in Canadian history.

Writing-on-Stone Provincial Park, 125 km (78 mi) east of Cardston, is one of the largest areas of protected prairie in the Alberta park system, a nature preserve and protection for rock art created by Plains People. There are 50 rock art sites, with thousands of figures, as well as archaeological sites.

Police Outpost Provincial Park is 32 kilometres (20 mi) south of Cardston, on the Canada/United States border, on the shores of Outpost Lake.

Primary industries are education, health care, entrepreneurship, agriculture, and tourism. Cardston is one of the few communities in Canada where alcohol cannot be sold or purchased.

Former schools include Leeside (grades 1 and 2 - torn down in the late 1980s to make way for the Remington-Alberta Carriage Centre) and Westside. The building that housed many of the junior high facilities, E.J. Wood School (including the gymnasium near the current high school), Parkland School, and John S. Smith Schools were torn down in 1993 as the junior high moved to the former Eastridge building. The Cardston High School underwent extensive renovations in the early 2000s, including an expansion to its gymnasium, much-improved fitness and weight room facilities, wider hallways, and a new cafeteria. 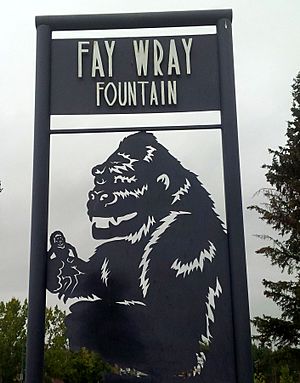 All content from Kiddle encyclopedia articles (including the article images and facts) can be freely used under Attribution-ShareAlike license, unless stated otherwise. Cite this article:
Cardston Facts for Kids. Kiddle Encyclopedia.