Canmore is a town in Alberta, Canada, located approximately 81 kilometres (50 mi) west from Calgary near the southeast boundary of Banff National Park. It is located in the Bow Valley within Alberta's Rockies. The town shares a border with Kananaskis Country to the west and south and the Municipal District of Bighorn No. 8 to the north and east. With a population of 12,288 in 2011, Canmore is the ninth-largest town in Alberta.

Canmore was officially named in 1884 by Canadian Pacific Railway director Donald A. Smith (later 1st Baron Strathcona and Mount Royal). It was named after Malcolm III of Scotland who was also nicknamed Canmore. Canmore is Gaelic for "Big Head"

By the 1890s, a North-West Mounted Police barrack had been instated on Main Street, but it was vacated in 1927. The building was restored in 1989 and it is under the care of the Canmore Museum and Geoscience Centre.

The coal mining industry in Canmore boomed well into the 20th century. In 1965, with a population of 2,000, Canmore was incorporated as a town. By the 1970s the market for coal was diminished, and in 1979 Canmore Mines Ltd. ceased operations. As a result of safety and reclamation policies instigated by the province of Alberta, all but a few mining structures were demolished in the following year; only the lamp house and a few mine entrances remain today.

Canmore's economic future seemed dismal until the announcement in the early 1980s that Calgary would be hosting the 1988 Winter Olympics, and that Canmore would play host to the Nordic events. This resulted in an increase in tourism, and Canmore began to develop into the recreational tourist destination it is today.

The Canmore Hotel sits on the main street as it has for over 100 years. The building has changed very little in this time making it one of the most distinguishable landmarks in Canmore. The hotel celebrated its 120th anniversary in October 2010. 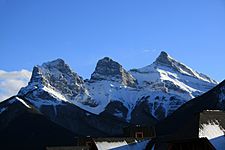 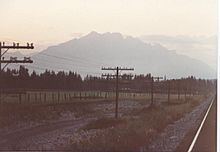 Concerns over Canmore's urban growth adjacent to provincial and national park land has led to many efforts to place a limit on future development. The town is expected to reach its maximum "build out" following the completion of the SilverTip and Three Sisters Mountain Village developments sometime around 2015–2020.

Bisected by the Trans-Canada Highway, located on the Canadian Pacific Railway and run through by the Bow River, Canmore is ideally situated on a number of major transportation routes, which has influenced its tourism-based economy and historical mining industry.

Much of the Canmore area has been designated a wildlife corridor. This corridor allows animals such as bears, cougar, wolves, and elk to move between habitat patches, where they can find food, escape predators, breed, give birth, and establish territories.

Despite its modest population and environmentally friendly image, Canmore is highly sprawled and segmented (due to wildlife corridors, highways, the railway, and the Bow River) and takes over one and a half hours to traverse by foot. The pedestrian-friendly town centre surrounds 8th Street, or "Main Street" (as it is known colloquially), which was originally a residential road with some of the oldest architecture in the town; now, however, it is lined with small shops, restaurants, and galleries. Much of the recent development is taking place in Three Sisters Mountain Village, SilverTip Resort, and around the town centre.

A series of hiking, mountain biking, equestrian, and paved trails traverse the Canmore area. Major trail systems are located on the Benchlands of Mount Lady Macdonald, at the Canmore Nordic Centre, and along the north slope of Mount Lawrence Grassi. Many of these trails, and others around the community, are located within Bow Valley Wildland Provincial Park and Kananaskis Country. Some of these, including the Montaine Traverse Trail and the Highline Trail, have been improved by the Town of Canmore, the Government of Alberta, the Municipal District of Bighorn No. 8, and various stakeholders (Bow Valley Mountain Bike Alliance, the B.V. Riding Association, and local hiking groups) in order to balance recreational opportunities with environmental sustainability. Much of the upgrading has been accomplished by volunteers organized by the Trail Care Program of The Friends of Kananaskis Country.

Mountains located adjacent to and visible from the townsite are:

Canmore's climate is relatively mild compared to some other regions of Alberta. It does not have an Environment Canada weather observation station, but the nearby town of Banff has an average high of −3.1 °C (26 °F) in January, with relatively low humidity. Summers are short with daytime temperatures ranging from 18 °C (64 °F) to 22 °C (72 °F).

About 1.5% of residents identified themselves as aboriginal at the time of the 2006 census.

Canmore has one museum, the Canmore Museum and Geoscience Centre (CMAGS) located along 7th Ave in the Canmore Civic Centre. In 2006, the Museum entered a Fee for Service agreement with the Town of Canmore to "act as the custodian of the Town's heritage, maintaining and preserving its artifacts, archives and to built heritage and to interpret this heritage through exhibitions and interpretive programming for residents and visitors on a year-round basis". 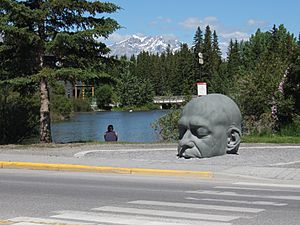 The Big Head sculpture in Canmore, located on main street north side of the bridge over Policeman's Creek

Many feature films have been shot in the Canmore area, including Brokeback Mountain, The Assassination of Jesse James by the Coward Robert Ford, Open Range, The Edge, Legends of the Fall, Shanghai Noon, Mystery Alaska, Snow Dogs, the pilot episode of Everwood, and others. The town was also popularized by the late John Morgan of the Royal Canadian Air Farce with his monosyllabic character "Mike from Canmore". 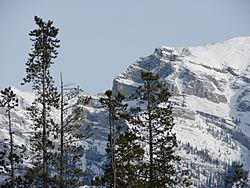 The Canmore Nordic Centre was originally constructed for the 1988 Winter Olympic Games. Cross-country skiing, biathlon, Nordic combined, and blind cross-country skiing events were held here. The Canmore Nordic Centre provides world-class trails for use by cross-country skiers, mountain bikers, unicyclists, trail runners, roller skiers, and hikers. It also has disc golf courses, and orienteering. It has provincial park status and is administered by Alberta Development. The centre was re-developed for the 2005 Cross-country World Cup and future international events. The Nordic Centre hosts national training camps for Canada's biathlon and cross-country ski teams, in addition to providing winter and summer recreational facilities to the general public. It has some 60 kilometres (37 mi) of world-class cross-country and biathlon trail systems designed to meet international Nordic competitive standards. The trails are groomed and trackset to accommodate both classic and skating techniques on the same trail. A 6.5 kilometres (4.0 mi) track is illuminated for night skiing.

The Day Lodge at the Canmore Nordic Centre offers services such as a cafeteria, meeting rooms, maps and information, day lockers, showers, washrooms, equipment rentals, and lessons. During the summer months the Centre converts to include mountain biking facilities and plays host to several national and international mountain bike events annually. The Nordic Centre also operates an 18 "hole" disc golf course during the summer months.

All content from Kiddle encyclopedia articles (including the article images and facts) can be freely used under Attribution-ShareAlike license, unless stated otherwise. Cite this article:
Canmore, Alberta Facts for Kids. Kiddle Encyclopedia.