Bassano is a town in Alberta, Canada. It is located on the Trans-Canada Highway approximately 140 kilometres (87 mi) southeast of Calgary and 160 kilometres (99 mi) northwest of Medicine Hat. It is also on the main line of the Canadian Pacific Railway. A short distance south of the town is the Bassano Dam (originally "Horse Shoe Bend Dam"), serves as a diversion structure which routes water through a canal into Lake Newell Reservoir which supplies water to the majority of the County of Newell for purposes like irrigation, recreation, and the County's drinking water.

The Bassano Dam holds the record for highest temperature in Alberta which is 43.3 degrees.

The community has the name of Marquis de Bassano, a railroad promoter. 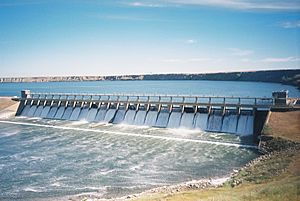 The population of the Town of Bassano according to its 2007 municipal census is 1,390.

All content from Kiddle encyclopedia articles (including the article images and facts) can be freely used under Attribution-ShareAlike license, unless stated otherwise. Cite this article:
Bassano, Alberta Facts for Kids. Kiddle Encyclopedia.