Clairmont is a hamlet in northern Alberta, Canada within the County of Grande Prairie No. 1. Previously an incorporated municipality, Clairmont dissolved from village status on January 1, 1946 to become part of the Municipal District of Bear Lake No. 740.

Clairmont is located in the Peace Country, along Highway 2, approximately 10 km (6.2 mi) north of Grande Prairie and 9 km (5.6 mi) south of Sexsmith.

Clairmont lies at an elevation of 685 m (2,247 ft), on the western shore of Clairmont Lake. Initially the area was commonly known as Twin Lakes. The first use of the name “Clairmont” was in 1907 by the earliest surveyor of the township boundaries, JB Saint Cyr. 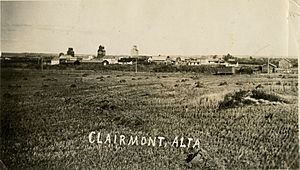 Development of the townsite really got started once it was surveyed and after the arrival of the Edmonton, Dunvegan & British Columbia Railway in 1916. By the end of 1916, the townsite had a railway station, two or three grain elevators, an agent’s house, the Buffalo Lakes Lumber Yard, Clairmont Hotel, a Union Bank, a butcher shop, several stores, a Baptist church, and a handful of residences. On September 10, 1915 the Clairmont Lake School District was opened. A post office was established in 1916. In 1922, a large fire consumed many Clairmont businesses, while a train station was built in 1923.

Clairmont was incorporated as a village in 1917, but renounced the village status in 1946 after a downturn in economy caused by the great depression. It eventually became the location of the County of Grande Prairie No. 1's municipal office.

The population of Clairmont according to the County of Grande Prairie No. 1's 2006 municipal census is 2,174.

All content from Kiddle encyclopedia articles (including the article images and facts) can be freely used under Attribution-ShareAlike license, unless stated otherwise. Cite this article:
Clairmont, Alberta Facts for Kids. Kiddle Encyclopedia.