Bowden is a town in central Alberta, Canada. It is located in Red Deer County on the Queen Elizabeth II Highway, approximately 45 km (28 mi) south of Red Deer.

The community takes its name from Bowdon, Greater Manchester, in England.

Nearby communities include Innisfail to the north, Caroline to the west, Huxley to the east and Olds to the south. 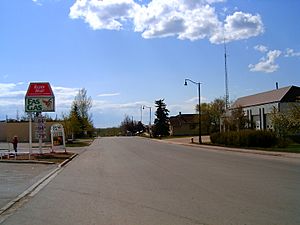 The population of the Town of Bowden according to its 2009 municipal census is 1,236.

Bowden has a nine-hole golf course with a fully licensed clubhouse.

All content from Kiddle encyclopedia articles (including the article images and facts) can be freely used under Attribution-ShareAlike license, unless stated otherwise. Cite this article:
Bowden, Alberta Facts for Kids. Kiddle Encyclopedia.