It was named in honour of George Bentley, an early homesteader. 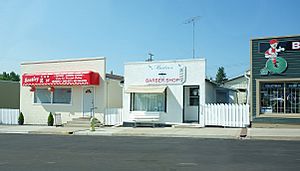 The first settlers came from the U.S. and either walked or drove oxen from Lacombe, which was the closest railroad station between 1888-1890. The first church was built in 1890 by the Methodists, and a schoolhouse was built in 1903. Bentley was incorporated as a village on March 17, 1915.

A disastrous fire destroyed all buildings on the south side of the community in 1916. The centre roadway was made 36 metres (118 ft) wide and new buildings could not be constructed inside that area. In 1930, a centre boulevard was constructed for fire protection and street lights installed.

Bentley was incorporated as a town on January 1, 2001.

The population of the Town of Bentley according to its 2009 municipal census is 1,132.

All content from Kiddle encyclopedia articles (including the article images and facts) can be freely used under Attribution-ShareAlike license, unless stated otherwise. Cite this article:
Bentley, Alberta Facts for Kids. Kiddle Encyclopedia.