Kids Encyclopedia Facts
This page is about black flies in the family Simuliidae. For other uses, see Blackfly (disambiguation).

A black fly or blackfly (sometimes called a buffalo gnat, turkey gnat, or white socks) is any member of the family Simuliidae of the Culicomorpha infraorder. They are related to the Ceratopogonidae, Chironomidae, and Thaumaleidae. Over 2,200 species of black flies have been formally named, of which 15 are extinct. They are divided into two subfamilies: Parasimuliinae contains only one genus and four species; Simuliinae contains all the rest. Over 1,800 of the species belong to the genus Simulium.

Most black flies gain nourishment by feeding on the blood of mammals, including humans, although the males feed mainly on nectar. They are usually small, black or gray, with short legs, and antennae. They are a common nuisance for humans, and many U.S. states have programs to suppress the black fly population. They spread several diseases, including river blindness in Africa (Simulium damnosum and S. neavei) and the Americas (S. callidum and S. metallicum in Central America, S. ochraceum in Central and South America).

Eggs are laid in running water, and the larvae attach themselves to rocks. Breeding success is highly sensitive to water pollution. The larvae use tiny hooks at the ends of their abdomens to hold on to the substrate, using silk holdfasts and threads to move or hold their place. They have foldable fans surrounding their mouths. The fans expand when feeding, catching passing debris (small organic particles, algae, and bacteria). The larva scrapes the fan's catch into its mouth every few seconds. Black flies depend on lotic habitats to bring food to them. They will pupate under water and then emerge in a bubble of air as flying adults. They are often preyed upon by trout during emergence. The larva of some South African species are known to be phoretic on mayfly nymphs. 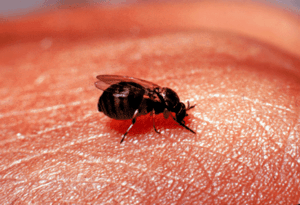 Adult males feed on nectar, while females exhibit anautogeny and feed on blood before laying eggs. Some species in Africa can range as far as 40 mi (64 km) from aquatic breeding sites in search of their blood meals, while other species have more limited ranges.

Different species prefer different host sources for their blood meals, which is sometimes reflected in the common name for the species. They feed in the daytime, preferably when wind speeds are low.

Black flies may be either univoltine or multivoltine, depending on the species. The number of generations a particular pest species has each year tends to correlate with the intensity of human efforts to control those pests.

Work conducted at Portsmouth University in 1986–1987 indicates Simulium spp. create highly acidic conditions within their midguts. This acidic environment provides conditions ideally suited to bacteria that metabolise cellulose. Insects cannot metabolise cellulose independently, but the presence of these bacteria allows cellulose to be metabolised into basic sugars. This provides nutrition to the black fly larvae, as well as the bacteria. This symbiotic relationship indicates a specific adaptation, as fresh-flowing streams could not provide sufficient nutrition to the growing larva in any other way. 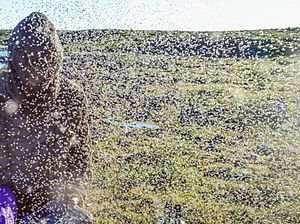 Only four genera in the family Simuliidae, Simulium, Prosimulium, Austrosimulium, and Cnephia, contain species that feed on people, though other species prefer to feed on other mammals or on birds. Simulium, the type genus, is the most widespread and is a vector for several diseases, including river blindness.

Mature adults can disperse tens or hundreds of miles from their breeding grounds in fresh flowing water, under their own power and assisted by prevailing winds, complicating control efforts. Swarming behavior can make outdoor activities unpleasant or intolerable, and can affect livestock production. During the 18th century, the "Golubatz fly" (Simulium colombaschense) was a notorious pest in central Europe. Even non-biting clouds of black flies, whether composed of males or of species that do not feed on humans or do not require a blood meal before egg laying, can form a nuisance by swarming into orifices.

Bites are shallow and accomplished by first stretching the skin using teeth on the labrum and then abrading it with the maxillae and mandibles, cutting the skin and rupturing its fine capillaries. Feeding is facilitated by a powerful anticoagulant in the flies' saliva, which also partially numbs the site of the bite, reducing the host's awareness of being bitten and thereby extending the flies' feeding time. Biting flies feed during daylight hours only and tend to zero in on areas of thinner skin, such as the nape of the neck or ears and ankles.

Itching and localized swelling and inflammation sometimes result from a bite. Swelling can be quite pronounced depending on the species and the individual's immune response, and irritation may persist for weeks. Intense feeding can cause "black fly fever", with headache, nausea, fever, swollen lymph nodes, and aching joints; these symptoms are probably a reaction to a compound from the flies' salivary glands. Less common severe allergic reactions may require hospitalization.

Repellents provide some protection against biting flies. Products containing the active ingredient ethyl butylacetylaminopropionate (IR3535), DEET (N,N-diethyl-meta-toluamide), or picaridin are most effective. Some beauty products have been found effective, and their use as insect repellents have been approved by EPA (e.g., Skin So Soft). However, given the limited effectiveness of repellents, protecting oneself against biting flies requires taking additional measures, such as avoiding areas inhabited by the flies, avoiding peak biting times, and wearing heavy-duty, light-colored clothing, including long-sleeve shirts, long pants and hats. When black flies are numerous and unavoidable, netting that covers the head, like the “bee bonnets” used by beekeepers, can provide protection.

Black flies are central to the transmission of the parasitic nematode Onchocerca volvulus which causes onchocerciasis, or "river blindness". It serves as the larval host for the nematode and acts as the vector by which the disease is spread. The parasite lives on human skin and is transmitted to the black fly during feeding.

All content from Kiddle encyclopedia articles (including the article images and facts) can be freely used under Attribution-ShareAlike license, unless stated otherwise. Cite this article:
Black fly Facts for Kids. Kiddle Encyclopedia.