Wilton is a town in Hillsborough County, New Hampshire, United States. The population was 3,677 at the 2010 census. Like many small New England towns it grew up around water-powered textile mills, but is now a rural bedroom community with some manufacturing and service employment. Wilton is home to the High Mowing School, a private preparatory school.

The compact town center, where 1,163 people resided at the 2010 census, is defined by the U.S. Census Bureau as the Wilton census-designated place and is located near the junction of New Hampshire Routes 31 and 101, at the confluence of Stony Brook with the Souhegan River.

The town was first part of a township chartered as "Salem-Canada" in 1735 by Colonial Governor Jonathan Belcher of Massachusetts, which then claimed this area. It was granted to soldiers from Salem, Massachusetts, who had served in 1690 under Sir William Phips in the war against Canada. "Salem-Canada" was one of the towns on the state's borders intended to provide protection against Indian attack.

It would be regranted in 1749 by New Hampshire colonial Governor Benning Wentworth as "Number Two", before being incorporated in 1762 as "Wilton". It was either named for Wilton, England, or for Sir Joseph Wilton, a famous English sculptor. Sir Wilton's coach design for King George III's coronation was later used as a model for the Concord coach. The town of Wilton, Maine, would later be named for Wilton, New Hampshire.

The Souhegan River originally provided water power for mills. Today, Wilton is a rural town with orchards, farms and woodlands.

The town center, defined as a census-designated place, has a total area of 1.9 square miles (5.0 km2). 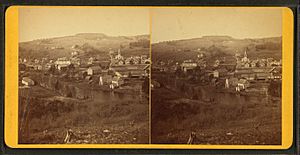 All content from Kiddle encyclopedia articles (including the article images and facts) can be freely used under Attribution-ShareAlike license, unless stated otherwise. Cite this article:
Wilton, New Hampshire Facts for Kids. Kiddle Encyclopedia.