Wilton is a town in Franklin County, Maine, United States. The population was 4,116 at the 2010 census. Situated beside Wilson Pond, the former mill town is today primarily a recreation area.

The land replaced an invalidated 1727 grant by Massachusetts to veterans for service in the French and Indian Wars. The first grant (now part of Manchester, New Hampshire) was originally dubbed Harrytown after a particularly dangerous Native American, then renamed Tyngstown for Captain William Tyng, leader of the expedition of "snowshoe men" that killed him in 1703. Abraham Butterfield, a settler from Wilton, New Hampshire, paid the cost of incorporation in 1803 to have the new town named after his former residence.

Wilton is known for being the location of Maine's first cotton mill, started in 1810 by Solomon Adams. In 1876, George Henry Bass (1855–1925) founded G.H. Bass & Co. and became the best-known businessman in Wilton's history. Bass shoes (including those worn by Charles Lindbergh during his Atlantic crossing and Admiral Byrd in his expeditions to Antarctica) were made exclusively in Wilton for more than a century until 1998. By then the Bass family had sold out, and in 1998 Bass' parent company, Phillips-Van Heusen, moved operations overseas.

John Russell Bass (b. 1878), son of G. H. Bass, was treasurer for the firm and served as Maine delegate to the Republican national convention in 1920, 1944 and 1952. The company built much of its success on the Bass penny weejun, introduced in 1936 and said to be based on Norwegian fisherman's shoes. The style was an instant hit, and became a staple on college campuses across the nation. The shoe was later renamed the Leavitt penny weejun; it is no longer made in Wilton.

Maine architect John Calvin Stevens designed the L. Brooks Leavitt home in Wilton. Stevens was the architect of many well-known Maine residences, including Winslow Homer's in Prouts Neck, Maine. An early Wall Street investment banker and rare book collector, Brooks Leavitt was an overseer and financial supporter of Bowdoin College and its library, and a relation of the Bass family. Esteemed Maine author Robert P.T. Coffin dedicated his book Captain Abby and Captain John to lifelong friend Leavitt, "a fellow son of Maine," whom Coffin eulogized in his poem "Brooks Leavitt," read at Leavitt's 1948 funeral in Wilton. A longtime patron of the arts, Brooks Leavitt was close to many New York artists and actors, including Francis Wilson, the foremost Broadway stage actor of his day.

Other historic buildings in Wilton include the Goodspeed Memorial Library and the Bass Boarding House, both of which are listed on the National Register of Historic Places.

According to the United States Census Bureau, the town has a total area of 42.82 square miles (110.90 km2), of which, 41.26 square miles (106.86 km2) of it is land and 1.56 square miles (4.04 km2) is water. Home to Wilson Lake (or Pond), Wilton is drained by Wilson Stream, a tributary of the Sandy River, in the Kennebec River watershed. The southwestern corner of town lies within the watershed of the Androscoggin River. 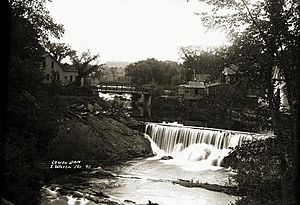 There were 1,708 households of which 30.3% had children under the age of 18 living with them, 50.6% were married couples living together, 11.2% had a female householder with no husband present, 5.6% had a male householder with no wife present, and 32.6% were non-families. 25.8% of all households were made up of individuals and 10.8% had someone living alone who was 65 years of age or older. The average household size was 2.41 and the average family size was 2.84.

There were 1,667 households out of which 31.7% had children under the age of 18 living with them, 54.2% were married couples living together, 11.0% had a female householder with no husband present, and 31.1% were non-families. 24.9% of all households were made up of individuals and 10.7% had someone living alone who was 65 years of age or older. The average household size was 2.47 and the average family size was 2.94. 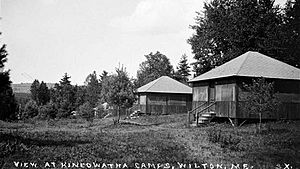 All content from Kiddle encyclopedia articles (including the article images and facts) can be freely used under Attribution-ShareAlike license, unless stated otherwise. Cite this article:
Wilton, Maine Facts for Kids. Kiddle Encyclopedia.