Farmington is a town in and the county seat of Franklin County, Maine, United States. As of the 2020 census, its population was 7,592. Farmington is home to the University of Maine at Farmington, Nordica Memorial Auditorium, the Nordica Homestead, and the annual Farmington Fair.

The area was once territory of the Canibas tribe of Abenaki Indians. They had two camps located near Farmington Falls, with fields cleared for cultivation of maize and potatoes. Their fort's stockade enclosed about an acre at the center of what is today Farmington Falls village. A group from Topsham arrived in 1776 to explore the area and lay out a town, called Plantation No. 1 or Sandy River Plantation, but permanent settlement was delayed by the Revolutionary War.

In 1781, the first settlers arrived, the same year a sawmill was established. On February 1, 1794, Sandy River Plantation was incorporated as Farmington, named for its unusually fertile soil. Beginning with a cluster of log houses at Farmington Falls, the town grew quickly and prospered. Agriculture was an important early occupation, with hay a principal product. Orchards yielded apples and other fruit. Farmington became one of the largest wool producing towns in New England, with many herds of sheep grazing the hills and intervales.

In 1879, the town became the southern terminus for the narrow gauge Sandy River Railroad (later part of the Sandy River and Rangeley Lakes Railroad), making it a gateway to the Rangeley Lake and Sugarloaf Mountain areas. Farmington suffered a devastating fire on October 22, 1886, when thirty-three houses, nineteen stores, three churches, the county jail and the post office were destroyed. The 1877 Methodist Church designed by noted architect Arthur H. Vinal survived. Farmington is today a college town and resort area.

The town is crossed by U.S. Route 2 and Maine State Routes 4, 27, 43, 133, and 149. It borders the towns of Industry and New Sharon to the east, Chesterville to the south, Wilton to the southwest, Temple to the west, and Strong and New Vineyard to the north.

Farmington is divided up into four local areas and is sometimes mapped as such. These areas are West Farmington, Fairbanks, Farmington Falls, and Farmington (downtown). All areas except Fairbanks have their own zip code, but they are all still within Farmington's town limits.

There were 3,072 households, of which 23.1% had children under the age of 18 living with them, 38.2% were married couples living together, 9.9% had a female householder with no husband present, 3.9% had a male householder with no wife present, and 48.0% were non-families. 34.1% of all households were made up of individuals, and 13% had someone living alone who was 65 years of age or older. The average household size was 2.17 and the average family size was 2.75.

Farmington is the subject of a prophecy by the Quaker Licia Kuenning (formerly Lisa Bieberman) about a Coming New Order in the town. This was originally prophesied for Tuesday 6 June 2006 but, after gathering more than 80 people together with no apparent miracles on that date, is now prophesied "within the next few years". 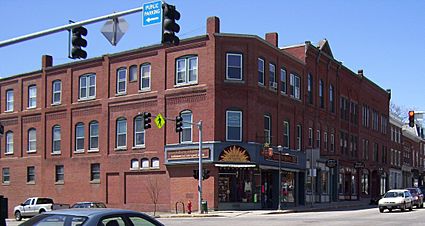 All content from Kiddle encyclopedia articles (including the article images and facts) can be freely used under Attribution-ShareAlike license, unless stated otherwise. Cite this article:
Farmington, Maine Facts for Kids. Kiddle Encyclopedia.