Osborne Reynolds FRS (23 August 1842 – 21 February 1912) was a prominent Irish-born British innovator in the understanding of fluid dynamics. Separately, his studies of heat transfer between solids and fluids brought improvements in boiler and condenser design. He spent his entire career at what is now the University of Manchester.

Osborne Reynolds was born in Belfast and moved with his parents soon afterward to Dedham, Essex. His father worked as a school headmaster and clergyman, but was also a very able mathematician with a keen interest in mechanics. The father took out a number of patents for improvements to agricultural equipment, and the son credits him with being his chief teacher as a boy.

Reynolds showed an early aptitude and liking for the study of mechanics. In his late teens, for the year before entering university, he went to work as an apprentice at the workshop of Edward Hayes, a well known shipbuilder in Stony Stratford, where he obtained practical experience in the manufacture and fitting out of coastal steamers (and thus gained an early appreciation of the practical value of understanding fluid dynamics).

Osborne Reynolds attended Queens' College, Cambridge and graduated in 1867 as the seventh wrangler in mathematics.

For the year immediately following his graduation from Cambridge he again took up a post with an engineering firm, this time as a practising civil engineer in the London (Croydon) sewage transport system.

In 1868 he was appointed professor of engineering at Owens College in Manchester (now the University of Manchester), becoming in that year one of the first professors in UK university history to hold the title of "Professor of Engineering". This professorship had been newly created and financed by a group of manufacturing industrialists in the Manchester area, and they also had a leading role in selecting the 25–year–old Reynolds to fill the position.

Reynolds remained at Owens College for the rest of his career – in 1880 the college became a constituent college of the newly founded Victoria University. He was elected a Fellow of the Royal Society in 1877 and awarded the Royal Medal in 1888. He retired in 1905 and died of influenza 21 February at Watchet in Somerset.. He was buried at the Church of St Decuman, Watchet. 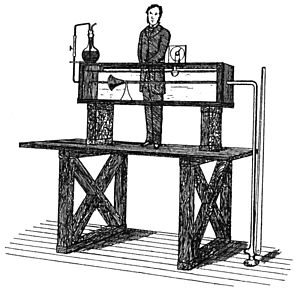 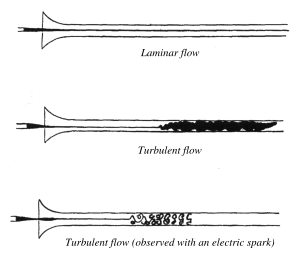 Reynolds' observations of the nature of the flow in his experiments

Reynolds most famously studied the conditions in which the flow of fluid in pipes transitioned from laminar flow to turbulent flow. In 1883 Reynolds demonstrated the transition to turbulent flow in a classic experiment in which he examined the behaviour of water flow under different flow rates using a small jet of dyed water introduced into the centre of flow in a larger pipe.

The larger pipe was glass so the behaviour of the layer of dyed flow could be observed, and at the end of this pipe there was a flow control valve used to vary the water velocity inside the tube. When the velocity was low, the dyed layer remained distinct through the entire length of the large tube. When the velocity was increased, the layer broke up at a given point and diffused throughout the fluid's cross-section. The point at which this happened was the transition point from laminar to turbulent flow.

From these experiments came the dimensionless Reynolds number for dynamic similarity—the ratio of inertial forces to viscous forces.

All content from Kiddle encyclopedia articles (including the article images and facts) can be freely used under Attribution-ShareAlike license, unless stated otherwise. Cite this article:
Osborne Reynolds Facts for Kids. Kiddle Encyclopedia.