Stony Stratford is a constituent town of Milton Keynes, Buckinghamshire, England. Historically it was a market town on the important route from London to Chester (Watling Street, now the A5). It is also the name of a civil parish with a town council within the Borough of Milton Keynes. It is in the north-west corner of Milton Keynes, bordering Northamptonshire and separated from it by the River Great Ouse.

The town name 'Stratford' is Anglo-Saxon in origin, and means 'ford on a Roman road'. The Roman road in this sense is the Watling Street that runs through the middle of the town. The ford is the crossing of the River Ouse. The prefix 'Stony' refers to the stones on the bed of the ford, differentiating the town from nearby Fenny Stratford. 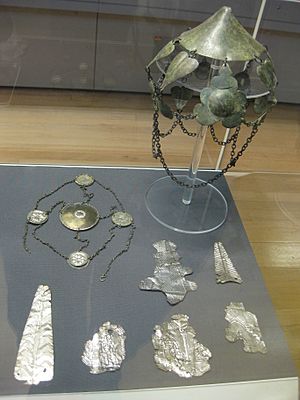 Part of the Stony Stratford Hoard, on display in the British Museum

In 1789, at Windmill Field in the parish of Old Stratford near Stony Stratford, an urn was uncovered which contained three fibulae and two headdresses. Known as the Stony Stratford Hoard, it also contained around thirty fragments of silver plaques which were decorated with images of the Roman gods Mars, Apollo and Victory. There were also inscriptions to Jupiter and Vulcan leading to theories that this was a votive hoard at a Roman temple.The hoard is now kept at the British Museum.

There has been a market in Stony Stratford since 1194 (by charter of King Richard I). (Until the early 1900s, livestock marts were still held in the market square but in more recent times the square has become a car park, apart from a monthly farmers' market in one corner. The weekly market has moved to Timor Court, and of course no longer deals in livestock). Stony Stratford formally became a town when it received letters patent from King John in 1215.

Stony Stratford was the location where, in 1290, an Eleanor cross was built in memory of the recently deceased Eleanor of Castile. The cross was destroyed during the English Civil War.

ARCHBISHOP: Last night, I hear, they lay at Stony Stratford,

The Rose and Crown Inn at Stony Stratford was reputedly where, in 1483, King Edward V stayed the night before he was taken to London (to become one of the Princes in the Tower) by his uncle Richard, Duke of Gloucester, who later became King Richard III. The inn is now a private house but a plaque on the front wall gives a brief account of the event.

Queen Anne House also known as Shell House, at 48 High Street, was once the Dower House for nearby Wolverton Manor (demolished in 1728). This house has many distinct sections, spanning from the 1520s to the early 1700s, with a rare number of original features still intact. The front portion is believed locally to have been underwritten in some way by Sir Christopher Wren or – more likely – his colleague Nicholas Hawksmoor circa 1700–1703. At dates which would appear to concur with this, Wren and Hawksmoor were sourcing building materials from Stony Stratford whilst working on other estates in close proximity. In 1700, Wren was busy remodelling Winslow Hall to the South; and at the same time Hawksmoor was working on Easton Neston to the North, which he completed in 1702.

Both men were known personally to one early 18th century owner of Queen Anne House, John Radcliffe, as all three belonged to the same masonic circle. Radcliffe, who was Queen Anne's physician, took ownership of the house in 1713 as part of his acquisition of the Wolverton estate. Architecturally, there are features within all three properties that bear more than a passing resemblance. The drawing room at Queen Anne House has scallop shell recesses which are notably similar to stairwell features at Easton Neston. Interestingly, the hallway is dominated by a grand oak staircase with carved inverted pentagrams: Hawksmoor was well known for his fondness of using pagan symbols in his designs, and as such has been posthumously referred to as "The Devil's Architect". Such use of appropriated "warding off" medieval symbolism would be entirely consistent with his hand. Despite compelling circumstantial evidence, given the passage of time it is unlikely that direct evidence will be uncovered linking Wren or Hawksmoor to Queen Anne House.

Catherine of Aragon rode from London to address her troops assembling here for the battle of Flodden, and went on to stay at Woburn Abbey in September 1513.

The town has twice become almost completely consumed by fire, the first time in 1736 and the second in 1742. The only building to escape the second fire was the tower of the chapel of ease of St Mary Magdalen.

Since at least the 15th century, Stony Stratford was an important stop on the road to Ireland via Chester, becoming quite rich on the proceeds in the 16th century. In the stage coach era of the 17th and early 18th centuries, it was a major resting place and exchange point with the east/west route with coaching inns to accommodate coach travellers. In the early 19th century, over thirty mail coaches and stagecoaches a day stopped here. That traffic came to an abrupt end in 1838 when the London to Birmingham Railway (now the West Coast Main Line) was opened at Wolverton – ironically, just three years after the bridge over the Ouse had been rebuilt. For the rest of that century, Stony was in decline until the arrival of the motor car, when again its position on the original A5 road made it an important stopping point for motorists. 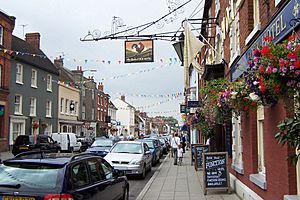 The High Street in festive mood

Today Stony Stratford is a busy, picturesque market town at the north-west corner of Milton Keynes. The many pubs, restaurants and specialist shops attract visitors from some distance. The highlight of the annual calendar is in early June (second Sunday) when Folk on the Green, a free (voluntary contribution) festival of folk music, folk rock and eclectic taste takes over Horsefair Green. 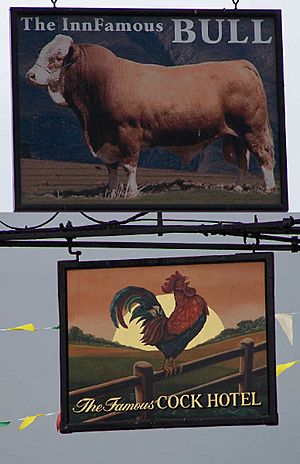 Pub signs of the Cock and the Bull

Due to the juxtaposition of the pubs in the centre of town, The Cock and The Bull, (both originally coaching inns) on the main London to Chester and North Wales turnpike), it is believed locally that the common phrase a cock and bull story originated here, however there is no evidence for this. Today, there is an annual story telling festival to celebrate these Cock and Bull stories.

Scenes from the 1987 cult film Withnail and I were filmed in Stony Stratford. Cox and Robinsons chemist is the 'Penrith tea rooms' where Withnail demands " the finest wines known to humanity." The Crown pub became the 'King Henry pub' in the film. Both premises are on Market Square.

The civil parish consists of the land north H3 Monks Way to the south, the city boundary to the west, the Great Ouse to the north and the A5 road to the east. The V4 Watling Street becomes Queen Eleanor Street here as it follows the original Stony Stratford bypass. Its districts are

The modern civil parish was established in 2001.

All content from Kiddle encyclopedia articles (including the article images and facts) can be freely used under Attribution-ShareAlike license, unless stated otherwise. Cite this article:
Stony Stratford Facts for Kids. Kiddle Encyclopedia.