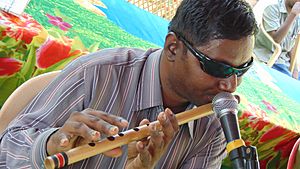 Man playing a flute. His chooses which fingers cover the holes to make the musical notes.

Cellists can also play in “thumb position” if they have several notes which are high and quite near one another. This means putting the thumb high up on the fingerboard, often across two strings.

Harp music looks like piano music: there are two staves, one which usually has a treble clef for the right hand, the other with a bass clef for the left hand. Some piano music can be played on the harp, but the piano fingering will not work. On a piano, starting with the thumb and going along the fingers to the little finger means going to higher notes in the right hand and to lower notes in the left hand. On the harp it is the other way round (the harpist sits with the high notes nearest to his body). The thumb is numbered 1 and the fingers are 2, 3 and 4. The little finger is not used in harp playing.