The cornett, cornetto, or zink is an early wind instrument that dates from the Medieval, Renaissance and Baroque periods, popular from 1500–1650. It was used in what are now called alta capellas or wind ensembles. It is not to be confused with the trumpet-like cornet.

The sound of the cornett was produced by lip vibrations against a cup mouthpiece. A cornett consists of a conical wooden pipe covered in leather, is about 24 inches long, and has finger holes and a small horn or ivory mouthpiece.

The ordinary treble cornett is made by splitting a length of wood and gouging out the two halves to make the gently conical, curved bore. The halves are then glued together, and the outside planed to an octagonal cross section, the whole being bound in thin black leather. Six front finger holes and a thumb hole on the back (like on the recorder) are bored in the instrument, and are slightly undercut. The socket for the mouthpiece at the narrow end is reinforced with a brass collar, often concealed by an ornamental silver or brass mount. The separate cup mouthpiece is usually made of horn, ivory, or bone, with a thin rim and thread-wrapped shank. 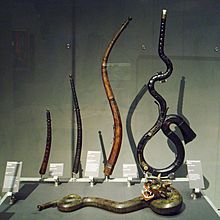 The cornett is generally agreed to be a difficult instrument to play—it requires a lot of practice. It embodies a design that survives today in the Russian Vladimir horn or rozhok.

The main tube has only the length of a typical woodwind, but the mouthpiece is of the brass type, relying on a combination of the player's lips and the alteration of the length of the sound column via the opening and closing of the finger holes to alter the pitch of the musical sound. Most modern brass instruments are considerably longer than the cornett, which permits the use of harmonics, the sound being altered by slides or valves to control the pitch.

The Baroque era was relatively tolerant of bright or extroverted tonal quality, as the surviving pipe organs of the time attest. Thus the Baroque theorist Marin Mersenne described the sound of the cornett as "a ray of sunshine piercing the shadows".

The cornett and authentic performance

As a result of the recent historically informed performance movement, the cornett has been rediscovered, and as before attracts the finest players. The violin was the usual substitute for the cornetto in historical music. The recorder, modern B-flat trumpet, oboe, and soprano saxophone have all been used as substitutes for the cornett in modern performances.

All content from Kiddle encyclopedia articles (including the article images and facts) can be freely used under Attribution-ShareAlike license, unless stated otherwise. Cite this article:
Cornett Facts for Kids. Kiddle Encyclopedia.