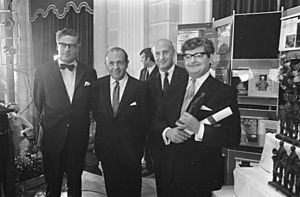 Violinists Norbert Brainin, Siegmund Nissel and Peter Schidlof were forced to leave Vienna for London because of their Jewish origin after Hitler's Anschluss of 1938. When World War II broke out they were sent to internment camps because they were "enemy aliens" (foreigners from a country that Britain was fighting against). The three violinists met up in camp and spent a lot of time playing music together. Soon they were set free because they were "distinguished artists" (actually they were unknown at the time). They studied with violin teacher Max Rostal, who taught them free of charge. Another student of Rostal was Suzanne Rozsa, who was married to the cellist Martin Lovett. Peter Schidlof changed to playing the viola, and they played string quartets together. In 1947 they formed the Brainin Quartet. Nissel then thought of the name "Amadeus Quartet". He thought it sounded better than calling the group by the name of the first violinist. The quartet was renamed the Amadeus Quartet in 1948 (Amadeus was one of Mozart's names).

The group gave its first performance as the Amadeus Quartet in the Wigmore Hall, London on Jan. 10, 1948. They were soon performing in concerts, festivals and masterclasses all over the world. The quartet made about 200 recordings, among them the complete quartets of Ludwig van Beethoven, Johannes Brahms, and W. A. Mozart. They also performed works by such 20th-century composers as Béla Bartók and Benjamin Britten (who wrote his third quartet especially for them).

The Amadeus was one of the most celebrated quartets of the 20th century.

They had always agreed that if one of them became ill or died, the quartet would not play with any other person. The quartet stopped playing in 1987 after the death of the violist Peter Schidlof.

'The Amadeus Forty Years in Pictures and Words' compiled by Suzanne Rozsa-Lovett available from beares1@btconnect.com

All content from Kiddle encyclopedia articles (including the article images and facts) can be freely used under Attribution-ShareAlike license, unless stated otherwise. Cite this article:
Amadeus Quartet Facts for Kids. Kiddle Encyclopedia.