Oregon, My Oregon facts for kids 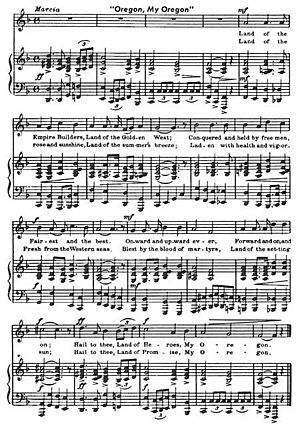 Sheet music for Oregon, My Oregon

"Oregon, My Oregon" is the state song of Oregon, United States. Written for a song contest in 1920, the 16-line, 2-verse song became the state's official song in 1927.

In 1920, the Society of Oregon Composers held a competition to select a state song for Oregon. The winning entry, "Oregon, My Oregon," was a collaboration between John Andrew Buchanan, who wrote the lyrics, and Henry Bernard Murtagh, who composed the music. Buchanan was an amateur lyricist who was an Astoria city judge, while Murtagh was a professional musician with a Broadway credit, but who was best known as a professionally trained theatre organist on the West Coast during the silent movie era.

Following the song's selection, the Society promoted the song by conducting performances at public gathering spaces around the state and at schools and universities (the state Superintendent of Public Instruction had endorsed the song).

On February 12, 1927, the song was officially adopted as the state song by a joint resolution of the Oregon State Legislature.

The song's lyrics were adapted and used in the song "the Afterlife" by the Oregon band YACHT on their album See Mystery Lights.

Buchanan's lyrics contain two main themes: honoring the early settlers and pioneers of Oregon, and praise for the natural beauty of the state. Murtagh composed the song as a march in F major. Unlike two other similarly named state songs—"Maryland, My Maryland" and "Michigan, My Michigan"—"Oregon, My Oregon" is not set to the tune of "O Tannenbaum."

Land of the Empire Builders,
Land of the Golden West;
Conquered and held by free men,
Fairest and the best.
Onward and upward ever,
Forward and on, and on;
Hail to thee, Land of Heroes,
My Oregon.

Land of the rose and sunshine
Land of the summer's breeze;
Laden with health and vigor,
Fresh from the Western seas.
Blest by the blood of martyrs,
Land of the setting sun;
Hail to thee, Land of Promise,
My Oregon.

All content from Kiddle encyclopedia articles (including the article images and facts) can be freely used under Attribution-ShareAlike license, unless stated otherwise. Cite this article:
Oregon, My Oregon Facts for Kids. Kiddle Encyclopedia.