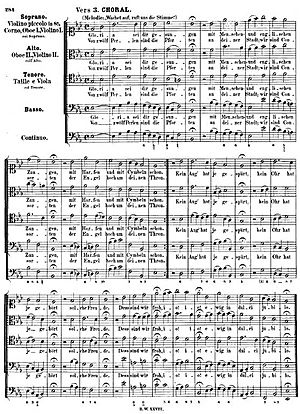 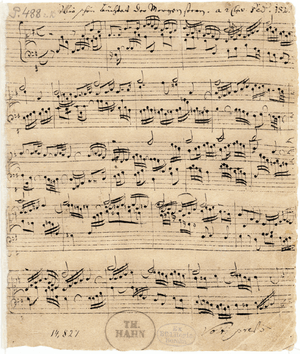 The autograph of Bach's chorale prelude on the hymn "Wie schön leuchtet der Morgenstern", BWV 739
This page is about the musical composition. For a singing group (sometimes called chorale), see choir.

A chorale (pronounce: "Ko-RAHL") is a hymn which is sung in a Lutheran church by all the people. Chorales developed during the late Renaissance and early Baroque period. Most of them were written at that time.

Martin Luther thought that the congregation (people worshipping in church) should have music to sing that was not too difficult. He thought that the words should be in German instead of Latin so that everybody would understand what they were singing about. Luther wrote the words of many chorales himself. He even composed some of melodies himself, such as Ein' feste Burg (A Mighty Fortress). Sometimes he used the traditional Gregorian Chant melodies from the Catholic worship and added new German words to it, for example Christ lag in Todesbanden (Christ lay in Death's Dark Bonds).

The words of a chorale have a rhyming pattern. Most of the melodies have an AAB shape (the melody of the first part sung twice, then the second part). This shape is called "Bar form" in German.

Johann Sebastian Bach used many chorale tunes, usually adding harmony of his own. He used these in his cantatas. Many of these chorales in four-part harmonies are sung as hymns today in German Protestant churches, and some of the tunes are used in English-speaking countries as well.

Chorale tunes also appear in chorale preludes, pieces for the organ. These would usually have been played during the church services before the chorale was sung.

Chorales were used by many later composers in their compositions, e.g. Felix Mendelssohn, Anton Bruckner and Max Reger.

All content from Kiddle encyclopedia articles (including the article images and facts) can be freely used under Attribution-ShareAlike license, unless stated otherwise. Cite this article:
Chorale Facts for Kids. Kiddle Encyclopedia.