The A natural minor scale.

A minor scale in music theory is any scale that has at least three scale degrees: the tonic, the minor third above the tonic, and the perfect fifth above the tonic. Together they make the minor triad. This includes many scales and modes such as Dorian mode and the Phrygian mode.

In simple terms, a minor scale is a series of notes with a sad, somber character (exaggerated when heard back-to-back with a major scale). A minor scale begins on the sixth note of its relative major scale, and is built with the following pattern of half steps and whole steps:

Usually, when people talk about minor scales, they mean natural minor, harmonic minor, or melodic minor scales, which are the most common in Western music.

The natural minor scale is the same as the 6th mode (or Aeolian mode) of the major scale. For example, the white notes of a keyboard from one C to the next C up makes a C major scale. If the white notes are played starting from the sixth step of that C scale, (from any A to the next A), then an A natural minor scale (the "relative minor" of C) is produced.

The harmonic minor scale is the same as the natural minor but with the seventh note raised up a semitone.

For example, in the key of A minor, the harmonic minor scale is:

One way the harmonic minor is different to the natural minor is that it has two chords which have the same structure when inverted, so they do not belong to any key. These are the diminished seventh chord (2nd, 4th, 6th and 7th degrees) and the augmented chord (the 3rd, 5th and 7th degrees).

The interval between the sixth and seventh degrees of this scale (in this case F and G♯) is an augmented second. While some composers, like Mozart, have used this interval in melodic composition, other composers found it awkward. They thought that a whole step between these two scale degrees was better for smooth melody writing, so they used the subtonic seventh, or raised the sixth scale degree. These two options are called the ascending melodic minor scale and descending melodic minor scale. The ascending has the same upper tetrachord to the major scale, and the descending is the same as the natural minor:

Many composers do not stick to the notes of only one of these scales when writing music. Using the triad of the relative major is very common, but because this is based on the third degree of the minor scale, the raised seventh degree of the harmonic scale would cause an augmented triad. In this case, composers usually use the natural minor. In jazz, usually only the ascending minor is used. 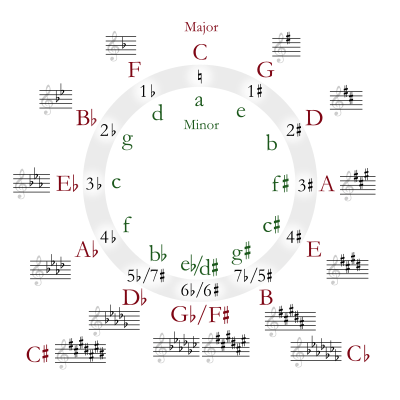 Circle of fifths showing major and minor keys and their signatures

Music may be written in an enharmonic scale (e.g. A♭ major, which only has four flats in its key signature, compared to the eight sharps required for G♯ major). The following are enharmonic equivalents:

All content from Kiddle encyclopedia articles (including the article images and facts) can be freely used under Attribution-ShareAlike license, unless stated otherwise. Cite this article:
Minor scale Facts for Kids. Kiddle Encyclopedia.