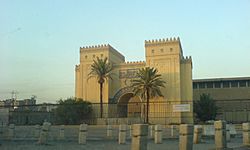 the entrance to National Museum of Iraq

The Iraq Museum, lately known as the National Museum of Iraq (Arabic: المتحف العراقي), is a history museum in Baghdad, Iraq. It shows the history of the civiliztions of Mesopotamia, Assyria and Babylon. The museum was started in 1926 by the British mandate in the Middle East.

All content from Kiddle encyclopedia articles (including the article images and facts) can be freely used under Attribution-ShareAlike license, unless stated otherwise. Cite this article:
National Museum of Iraq Facts for Kids. Kiddle Encyclopedia.