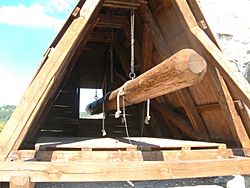 A battering ram is a siege engine used in the past. It was used to break open the stone walls of castles or splinter their wooden gates.

In its simplest form, a battering ram is just a large, heavy log carried by several people and banged against an obstacle. The ram damages the target if the big log hit the target again and again. Later rams were covered in the log with an arrow-proof, fire-resistant canopy mounted on wheels. Inside the canopy, the log was swung from chains or ropes.

Rams were great weapons of war against old fashioned wall-building materials such as stone and brick. These walls were weak in tension: they cracked when struck with sufficient force. With many blows, the cracks would grow steadily until a hole was created. Eventually, a breach would appear in the fabric of the wall. It would cause armed attackers to force their way through the gap.

The introduction in the later Middle Ages of siege cannons causes the end of battering rams and other traditional siege weapons. Much smaller, hand-held versions of battering rams are still used today, however, by law enforcement officers and military personnel to bash open locked doors.

All content from Kiddle encyclopedia articles (including the article images and facts) can be freely used under Attribution-ShareAlike license, unless stated otherwise. Cite this article:
Battering ram Facts for Kids. Kiddle Encyclopedia.