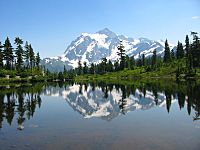 There are four prominent waterfalls in the basin of a short tributary of Sulphide Creek, on the southeast flank of 9,127-foot (2,781m) Mount Shuksan in North Cascades National Park, Washington. Seahpo Peak Falls and Cloudcap Falls, the taller two of the three, are located on separate streams that converge and plunge over Rockflow Canyon Falls. The unnamed outlet stream from these waterfalls flows into Sulphide Creek, which flows into the Baker River. Another waterfall is Jagged Ridge Falls, on a tributary of the unnamed stream.

It is located near the five waterfalls of Sulphide Basin.

Its name stems from a Chinook Jargon word meaning "cap".

All content from Kiddle encyclopedia articles (including the article images and facts) can be freely used under Attribution-ShareAlike license, unless stated otherwise. Cite this article:
Mount Shuksan Waterfalls Facts for Kids. Kiddle Encyclopedia.