Mount Redoubt is a mountain in the North Cascades range in Whatcom County, Washington state. The peak is located 3.0 miles (5 km) to the Canada–US border, 16.3 miles (26 km) east-northeast of Mount Shuksan. It is the 21st highest peak in the state, with a height of 8,956 feet (2,730 m) and a prominence of 1,649 feet (503 m). Redoubt is in the Skagit Range, a sub-range of the North Cascades, in the Custer-Chilliwack Group which includes Mount Spickard, Mount Redoubt, Mount Custer and Mox Peaks, among others. Redoubt, Bear, and Depot creeks drain off the mountain, which is composed of Skagit gneiss. Mount Redoubt is listed as one of the "Classic Eight Peaks" in the North Cascades.

The mountain lies within the Stephen Mather Wilderness of North Cascades National Park, in remote terrain far from human settlement and difficult to access. It was first climbed in 1930, by Jimmy Cherry and Bob Ross. The nearest higher peak is Mount Spickard, (8,979 ft or 2,737 m), which is 2.9 miles (4.7 km) to the east-northeast. Spickard's prominence is much greater than Redoubt's. The Redoubt Glacier lies on the eastern slopes of the peak and smaller unnamed glaciers lie to the north.

There is a smaller mountain 2.9 miles (4.7 km) northwest of Mount Redoubt called Nodoubt Peak, whose name is a play on the larger mountain's name. Nodoubt Peak was named by a group of geologists who climbed the peak in 1967.

Mount Redoubt is located in the marine west coast climate zone of western North America. Most weather fronts originate in the Pacific Ocean, and travel northeast toward the Cascade Mountains. 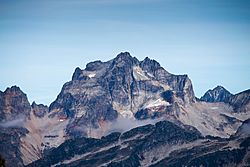 All content from Kiddle encyclopedia articles (including the article images and facts) can be freely used under Attribution-ShareAlike license, unless stated otherwise. Cite this article:
Mount Redoubt (Washington) Facts for Kids. Kiddle Encyclopedia.