Jack Mountain is the 17th highest mountain in Washington state. It is one of the 10 non-volcanic peaks in Washington State over 9,000 feet (2,700 m). It towers dramatically over the south end of Ross Lake, rising 7,450 ft (2,271 m) above the lakeshore in only 3 horizontal miles (4.8 km). Nohokomeen Glacier nearly fills the cirque on the upper north slopes of the mountain.

Jack Mountain was first described by surveyor Henry Custer in 1859, and was named for prospector Jack Rowley who was active on Canyon Creek. The first recorded ascent of Jack Mountain was made in 1904 by topographer E.C. Barnard. By the 1980s climbing routes had been established on most ridges, glaciers, and directions, seven in total. Most are class 4 but some involve true technical climbing. All are long routes with a great deal of vertical gain, meaning most parties take three to four days to climb the mountain.

The mountain is composed mostly of Metavolcanic rock and Metasedimentary rock from the Hozameen Group. Most predominant is Greenstone from the Jurassic to Permian periods. Most surface material is heavily eroded, by water Glacier ice. The lower flanks of the mountain in the Devils creek basin Maine sedimentary rock from the lower Cretaceous period, part of the Harts Pass Formation. The lower flanks of the mountain on the Ross lake side are composed of many diffent rock types including Orthogneiss, Ultramafic rock, low grade Phyllite, Tonalite, Continental glacier drift, Diorite, and Schist. 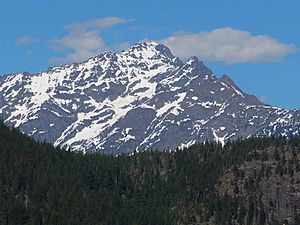 The Jack Mountain area consists of one small thrust fault, and a few other normal faults, none showing any seismic activity. Jack Mountain was created when the Hozameen Group was thrusted over the younger Harts Pass formation to the east. Most likely caused by the Ross lake Fault to the west. The lower flanks of the mountain to the west were created by the Ruby Creek Heterogeneous plutonic belt.

All content from Kiddle encyclopedia articles (including the article images and facts) can be freely used under Attribution-ShareAlike license, unless stated otherwise. Cite this article:
Jack Mountain Facts for Kids. Kiddle Encyclopedia.